The Best of Frank Deford: I'm Just Getting Started... (Hardcover) 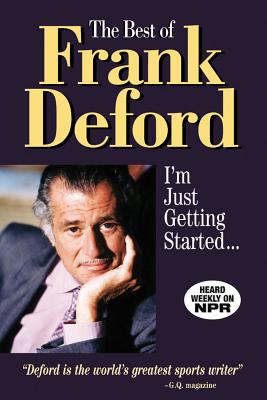 The Best of Frank Deford: I'm Just Getting Started... (Hardcover)

Whether Frank Deford is the voice you hear on National Public Radio's Morning Edition or the name you see in the Newsweek byline, you are sure to be highly entertained with the irreverent musings of this much-acclaimed sports mind. Deford possesses a witty and poignant take on the world of athletics that has earned him a wealth of fans, from the most ardent sports enthusiast to the greenest novice. In this best of the best compilation, Deford creates insightful, richly, drawn yarns on the human drama and the occasional high comedy of athletic competition. The Best of Frank Deford relates not only the specific and the spectacular events that make up great sports writing, but reflects through sports the larger world of American culture. This is a grand collection of his most vivid caricatures, colorful anecdotes, and out-of-left-field observations on the often humbling and humorous nature of sport. The Best of Frank Deford is a treasure of Deford's best writing and will make an instant fan of any reader.

Frank Deford is a senior contributing writer for Sports Illustrated, an author, a commentator for National Public Radio, and a correspondent for Real Sports with Bryant Gumbel on HBO.