The Dictionary of Dreams: Over 1,000 Dream Symbols, Signs, and Meanings - Pocket Edition (Hardcover) 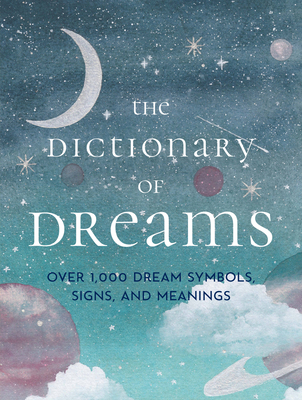 The Dictionary of Dreams: Over 1,000 Dream Symbols, Signs, and Meanings - Pocket Edition (Hardcover)


Not On Our Shelves—Ships in 1-5 Days
The Dictionary of Dreams provides the necessary tools to interpret almost every dream object and its hidden meaning to better understand what your subconscious is telling you. Now in a pocket-size edition for easy, on-the-go instruction.

Dreams can be fun and adventurous, but also frightening and distorted, and still again, they can be an endless combination of both. From spitting teeth out (a sign of aging), to creepy, crawly spiders (a sign that one feels like an outsider), dreams can mean much more to us once we learn how to decipher their hidden meanings. Whether positive or negative, The Dictionary of Dreams gives you all the tools, symbols, and their true meanings to translate our cryptic nightly images.

Starting with selections from classic texts like Interpretation of Dreams by Sigmund Freud, the father of psychoanalysis, and 10,000 Dreams Interpreted by Gustavus Hindman Miller, one of the first authors to complete a thorough study of all the symbols that appear in our dreamscape, this updated edition features revisions (such as the addition of cell phones, computers, televisions, and more) of Miller’s original interpretations to bring the book up to speed with our modern life.

Gustavus Hindman Miller (1857–1929) was a prominent manufacturer from Chattanooga, TN, as well as the author of the influential book 10,000 Dreams Interpreted.

Sigmund Freud (1856–1939) was an Austrian neurologist and the founder of psychoanalysis, a clinical method for treating psychopathology through dialogue between a patient and a psychoanalyst. His work contributed heavily to the fields of psychotherapy and psychoanalysis.

Henri Bergson (1859 - 1941) was a French philosopher, influential especially in the first half of the 20th century and after WWII in continental philosophy. Bergson is known for his influential arguments that processes of immediate experience and intuition are more significant than abstract rationalism and science for understanding reality.

Linda Shields, also known as The Jersey Shore Medium®, is a wife and mom who has had a full, working life. She is a celebrity clairvoyant and regularly entertains and works with large audiences, as well as one-on-one sessions. She uses her psychic senses of hearing (clairaudience), tasting/ smelling (clairsensient), physical feeling, and being an Empath during readings. A published author, her works include Angel Inspirations for Serenity and Love and Crystal Power.

"Exceptionally 'user friendly' in organization and presentation, The Dictionary of Dreams is recommended as a core addition to personal, professional, community, college, and university library Metaphysical Studies collections in general, and Dream Interpretation studies lists in particular."—Midwest Book Review