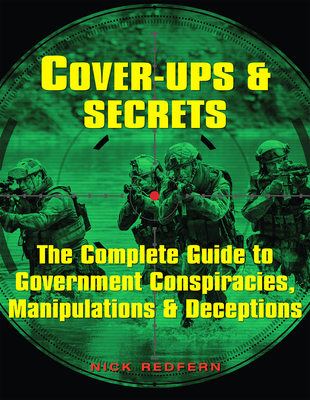 
Not On Our Shelves—Ships in 1-5 Days
A compelling look at the misuse of power, lies, corruptions and cover-ups

Fake news, alternative facts, outright lies, fears of nuclear war, widespread surveillance of the population, mass shootings, the rise of a totalitarian state and more have led millions of us to distrust the word of government. And with good reason, too. There are countless conspiracy theories in circulation that suggest the world as we see it is not as it really is. Disinformation campaigns try to tell us that up is down and right is wrong.

More and more people are beginning to realize that we are being manipulated and lied to. We are denied access to secrets that shouldn't be secrets. Our politicians obfuscate, deny, and outright lie. No one knows whom to trust. The nightly news is being replaced by carefully orchestrated propaganda. Our iPhones are monitored as are our laptops and our landlines. As for social media, that too is ripe for spying by men in black suits. No wonder, then, that the last few years have seen an incredible rise in conspiracy theories about deceptions and cover-ups. They range from the controversial to the shocking and from the nightmarish to the downright terrifying. And you can find all of them in the pages of Cover-Ups & Secrets: The Complete Guide to Government Conspiracies, Manipulations & Deceptions.

From the dark agendas to restrict our access to the Internet and even ban books to suppressing cancer cures to ensure the pharmaceutical industry continues to reap gigantic profits and the murder of politicians, scientists, world leaders, and even Princess Diana in the name of national security. Cover-Ups & Secrets reveals dozens of nefarious conspiracies, plots, hidden agendas, and betrayals, including ...

Amazon's Alexa, the secret spy in the home NASA misdirections The classified Pentagon program on alien life Clandestine plans for nuclear and bacteriological warfare NSA's penetration of cell-phones, email, Facebook, Twitter, and Skype messages Suspicious deaths The Bilderbergers, the Illuminati, and the Bohemian Club Secrets of the Philadelphia Experiment Reptilian Aliens and the British Royal Family The Patriot Act and the government's monitoring of reading habits And much, much more.
Nick Redfern works full time as an author, lecturer, and journalist. He writes about a wide range of unsolved mysteries, including Bigfoot, UFOs, the Loch Ness Monster, alien encounters, and government conspiracies. His many books include Visible Ink Press' Secret History: Conspiracies from Ancient Aliens to the New World Order; Control: MKUltra, Chemtrails and the Conspiracy to Suppress the Masses; Secret Societies: The Complete Guide to Histories, Rites, and Rituals; The Bigfoot Book: The Encyclopedia of Sasquatch, Yeti, and Cryptid Primates; Area 51: The Revealing Truth of UFOs, Secret Aircraft, Cover-Ups & Conspiracies; and The Monster Book: Creatures, Beasts, and Fiends of Nature. He has appeared on numerous television shows, including History Channel's Monster Quest and UFO Hunters; VH1's Legend Hunters; National Geographic Channel's The Truth about UFOs and Paranatural; the BBC's Out of this World; MSNBC's Countdown; and SyFy Channel's Proof Positive. Nick lives just a few miles from Dallas, Texas' infamous Grassy Knoll.