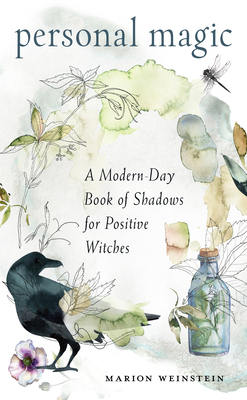 
Not On Our Shelves—Ships in 1-5 Days
A classic of practical magic that presents witchcraft as a life-affirming spiritual path—from one of the grand dames of witchcraft.

Marion Weinstein was one of the founders of modern-day witchcraft. Personal Magic is her book of shadows, what they used to call a grimoire or book of spells. It presents her personal approach to witchcraft, what she learned over her many decades of practicing magic:

“In the old days,” she writes, “a ‘Book of Shadows’ was kept for joyful reasons—to pass on the work to others. Every witch who could write had one.” During times of repression, these works were a way of preserving the religion. “Today, we are back to the original purpose of sharing the craft with others.” This book is Marion’s gift to you. It is also an invitation to start creating your own book of shadows.

Personal Magic is filled with how-tos and practical advice that shows readers how to unlock their psychic abilities to guide them in the creation of their own unique and personal magical work. Every technique is explained in detail, in keeping with Weinstein's proviso that one should never attempt to work any magic unless one understands it fully.

Marion Weinstein (1939–2009) was an author, teacher, media personality, and proud New York "city witch." Known as "The Ethics Witch," she is one of the founders of the modern witchcraft movement. She was the first to coin the phrase and define Positive Magic, and clearly delineate its use. Her radio show, Marion's Cauldron, was the first regularly scheduled Wiccan and psychic programming on record, and was a New York phenomenon for fourteen years.