Yemaya: Orisha, Goddess, and Queen of the Sea (Paperback) 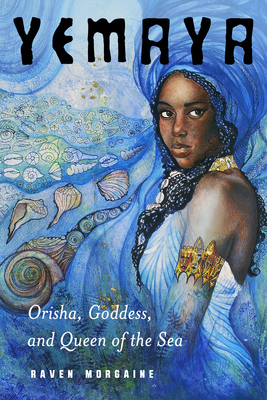 Yemaya: Orisha, Goddess, and Queen of the Sea (Paperback)


Not On Our Shelves—Ships in 1-5 Days
A celebration and practical guide to the renowned and beloved goddess and orisha.

Yemaya, queen of the sea, first emerged in Yorubaland (now in modern Nigeria). A primordial deity, considered the mother of all, some perceive her to be at the root of numerous ancient goddesses, including Isis. During the Middle Passage, Yemaya accompanied her enslaved devotees to the Western Hemisphere, where her veneration took root and flourished. She is among the most beloved and prominent spirits of Candomblé, Santeria, and other African diaspora traditions.

Through her associations with the Virgin Mary, devotion to Yemaya spread throughout Latin America. Cuban immigrants brought Yemaya with them to the US, where her veneration expanded exponentially. No longer a local water spirit, she became an internationally beloved goddess whose devotees derive from numerous traditions and who worship her in her many fluid forms. Yemaya currently ranks among the most beloved goddesses worldwide.

Raven Morgaine, a priest of Yemaya for over three decades, shares his expertise and knowledge in Yemaya: Orisha, Goddess, and Queen of the Sea, the first full-length English language book accessible to general readers. Morgaine explores Yemaya’s history and her many forms, including her roles as mother, lover, witch, warrior, and mermaid. He describes her many paths, aspects, and incarnations. Simultaneously a celebration of Yemaya and a practical, hands-on guide to working with her, Yemaya explores her mythology in depth, as well as her special role in the LGBQT community.

The book features:
A spiritual artist who has dedicated his life and work to the service of the great mother goddess, Yemaya, Raven Morgaine is a practitioner of Candomblé, New Orleans Voodoo, Santeria, and witchcraft. He is the owner of the Familiar Spirits shop in Coventry, Rhode Island, where he creates and sells the spirit altar dolls for which he is renowned. Raven’s art is on display at the Wonder Woman Museum in Connecticut, and he has been featured in numerous publications and podcasts. He lives in Rhode Island.
“The instructive explanations of rituals and Yemaya’s historical roots make this a perfect introduction . . . This will appeal to anyone interested in the spiritual traditions of West Africa."
— Publishers Weekly

“Raven Morgaine is a gifted storyteller and visionary in multiple disciplines. His jam-packed, beautifully illustrated book will lead you to understand, in laymen’s terms, anything and everything you ever wanted to know about the African orisha, Yemaya, as a noninitiate. This book is an enveloping and compelling read. It will lead you to take meaningful action, following in Morgaine’s footsteps, to immerse in Yemaya’s complex energies.”
— Stephanie Rose Bird, author of Sticks, Stones, Roots and Bones and 365 Days of Hoodoo

“Yemaya: Orisha, Goddess and Queen of the Sea is a supremely well-written, engaging, and all-encompassing account of the goddess and her many attributes and paths. It includes real life stories depicting the love that Yemaya has for humanity and the many miracles she has performed. Raven Morgaine has the grasp of Santeria, as did my Cuban elders, and his stunning artwork dedicated to Yemaya is breathtaking! Written for neophytes as well as seasoned santeros, this is a captivating tribute to Yemaya and destined to become a classic.”
— Miss Aida, santera and author of Hoodoo Cleansing and Protection Magic and Hoodoo Justice Magic

“Yemaya is a dedicated mother, powerful goddess, ruthless warrior, possessive lover, wise healer, and among the oldest deities in Africa. Venerated in numerous magical traditions and religions around the globe, her origin is so uncertain that it is quite easy to think of Yemaya as the first Mother Goddess of Africa, even perhaps as the first Mother Goddess of humanity, as, in the end, we all come from Africa, and in one way or another we all descend from her. In his book Yemaya: Orisha, Goddess, and Queen of the Sea, Raven Morgaine guides you through her myths and pataki and evokes her in her highest splendor. For followers of the Yoruba religion, Lucumi, Umbanda, Candomblé, and Santeria, as well as the many paths of modern Vodou, this book is a pivotal tool.”
— Elhoim Leafar, author of The Magical Art of Crafting Charm Bags and Manifestation Magic

“What an amazing tribute to the goddess that I have been crowned for so many years. This homage to Yemaya will resonate with and enlighten any reader. Raven Morgaine delivers authenticity to the patakí or parables that represents the African diaspora in its truest form. Yemaya: Orisha, Goddess and Queen of the Sea is stellar literature.”
— Alexander Cabot, santero, high priest, and author of Touched by the Goddess: Memoirs of a High Priest

“Not just a beautiful offering to Yemaya herself, Raven Morgaine’s Yemaya: Orisha, Goddess, and Queen of the Sea is a much-needed guide for those interested in respectfully honoring her. Filled with fluid stories, personal experiences, her history, song, prayers, herbal knowledge, and more, this is a must-have for any water witch interested in honoring the radiant Goddess of the Sea.”
— Annwyn Avalon, author of The Way of the Water Priestess and Water Witchcraft