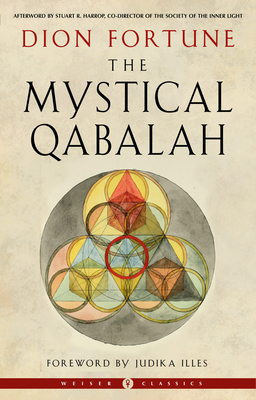 
On Our Shelves Now at:
An occult classic and a Dion Fortune bestseller of strongly growing interest.

Fortune was one of the first to bring this “secret tradition” to a wider audience with her clear and comprehensive exploration of the Qabalah tradition. The Mystical Qabalah remains a classic in its clarity, linking the broad elements of Jewish traditional thought—probably going back to the Babylonian captivity and beyond—with both Eastern and Western philosophy and later Christian insights.

The Qabalah could be described as a confidential Judaic explanation of the paradox of “the Many and the One”—the complexity and diversity within a monotheistic unity. Whereas the Old Testament outlines the social and psychological development of a tightly knit “chosen group” culture, the supplementary Qabalah provides a detailed plan of the infrastructure behind the creative evolutionary process.

The Mystical Qabalah devotes a chapter to each of the ten schematic “God-names,” the qualities or Sephiroth which focus on the principal archetypes behind evolving human activity: the Spiritual Source; the principles of Force and Form; Love and Justice; the Integrative principle or the Christ Force; Aesthetics and Logic; the dynamics of the Psyche; and, finally, the Manifestation of life on Earth in a physical body.
Dion Fortune (born Violet Mary Firth, 1890–1946), founder of the Society of the Inner Light, is recognized as one of the most luminous figures of 20th-century esoteric thought. A prolific writer, pioneer psychologist, powerful psychic, and spiritualist, she dedicated her life to the revival of the Western Mystery Tradition. She was also a member of the Order of the Golden Dawn, whose members included A. E. Waite, Aleister Crowley, and W. B. Yeats.