Fast Times in Palestine: A Love Affair with a Homeless Homeland (Paperback) 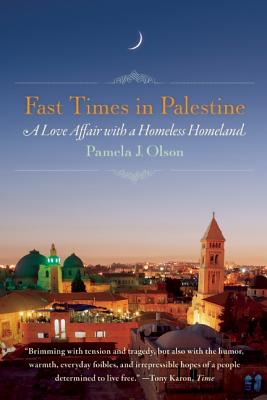 Fast Times in Palestine: A Love Affair with a Homeless Homeland (Paperback)

For much of her life—like many Westerners—most of what Pamela Olson knew of the Middle East was informed by headlines and stereotypes. But when she traveled to Palestine in 2003, she found herself thrown with dizzying speed into the realities of Palestinian life.

Fast Times in Palestine is Olson's powerful, deeply moving account of life in Palestine-both the daily events that are universal to us all (house parties, concerts, barbecues, and weddings) as well as the violence, trauma, and political tensions that are particular to the country.

From idyllic olive groves to Palestinian beer gardens, from Passover in Tel Aviv to Ramadan in a Hamas village, readers will find Olson's narrative both suspenseful and discerning. Her irresistible story offers a multi-faceted understanding of the Palestinian perspective on the Israel-Palestine conflict, filling a gap in the West's understanding of the difficult relationship between the two nations. At turns funny, shocking, and galvanizing, Fast Times in Palestine is a gripping narrative that challenges our ways of thinking-not only about the Middle East, but about human nature, cultural identity, and our place in the world.

Pamela Olson lived in Ramallah for two years, during which she served as head writer and editor for the Palestine Monitor and foreign press coordinator for Dr. Mustafa Barghouthi’s 2005 presidential campaign. She’s published stories and articles in CounterPunch, Electronic Intifada, Mondoweiss, Israel’s Occupation Magazine, and The Stanford Magazine, and she also wrote an essay about disputed holy sites for the Encyclopedia of the Israeli-Palestinian Conflict. She lives in New York City.

"Pamela Olson's insightful, sometimes shocking, but always deeply human account of the Palestinian reality should be read by anyone who wants to get beyond the myths and misconceptions around the Palestinian struggle. The effortless narrative is driven by encounters with ordinary, and sometimes extraordinary, people sometimes as confused as the rest of the world about their reality. But Olson is clear in laying out the stark truth of dispossession, oppression, and outright racism imposed on the Palestiniansinsights all too lacking in news reports and political debate." Chris McGreal, The Guardian

"A moving, inspiring account of life in Palestine that's enormously informative yet reads like a novel!" Rebecca Vilkomerson, Executive Director of Jewish Voice for Peace

"It's love in the time of occupation as Pamela Olson . . . takes us on the emotional roller-coaster of her very personal experience of life in Ramallah. . . A charming book brimming with tension and tragedy, but also with the humor, warmth, everyday foibles and irrepressible hopes of a people determined to live free." Tony Karon, senior editor of TIME Magazine

"Pamela Olson leads the reader on an exciting, funny, at times heart-wrenching journey, carefully deciphering complex political and historical issues. Olson is a talented writer, intelligent and exceptional in her ability to convey both tragedy and hope, remaining morally grounded and refreshingly honest." Ramzy Baroud, author of My Father was a Freedom Fighter

"As an Israeli whose life was shaped by the Israeli-Palestinian conflict, I found Fast Times in Palestine moving and refreshing. Pamela Olson comes to the Middle East with a blank slate and is therefore able to hold up an undistorted mirror to the reality she encounters." Miko Peled, author of The General's Son