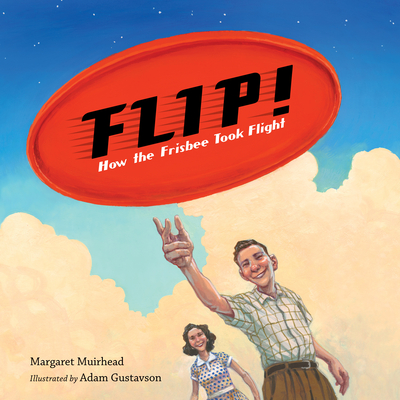 
On Our Shelves Now at:
This charming picture book biography about the inventor of the Frisbee follows the twists and turns of innovation and highlights the persistence it takes to succeed.

Fred Morrison is credited with inventing this classic toy, but for centuries folks have been flipping for flying discs. Ancient Greeks flicked discs, and beginning in the 1920s, college kids at Yale University were tossing pie tins.

Fred's invention quest began in 1932 after tossing a tin popcorn lid around the backyard. For more than twenty years, Fred and his wife, Lu, tried and failed to perfect a flying-disc concept. Eventually they created what we know today as the Frisbee.

Fun and fact-filled, this Frisbee origin story is sure to delight sports and STEM fans alike.
Margaret Muirhead is the author of Mabel, One and Only. Her essays and poetry have appeared in a number of publications, including Boston Globe Magazine, Family Fun Magazine, This Picture Book Life, and many others.

Adam Gustavson received his bachelor's degree in illustration from Rowan University and his master's from the School of Visual Arts in New York. He has illustrated several picture books, including the award-winning Good Luck, Mrs. K!; Long-Armed Ludy and the First Women's Olympics; and Dirty Rats. www.adamgustavson.com
Where do new ideas come from?
No one knows exactly who created the flying disc. Was it cavekids who flung round rocks? Ancient Greeks who threw the first discus? 1920s New England college students who flew empty pie plates made by a baker named Frisbie? Or was it high school football player Fred Morrison, who started tossing the lids of popcorn tins in 1937? One thing is certain: Fred Morrison became entranced with the idea of a flying disc and was convinced that it could succeed. Zippy, well-paced text teeming with consonance and energetic, engaging retro-style illustrations trace Morrison’s development of the toy. After pursuing several prototypes, bouncing back from failure, partnering with his wife, and blending the idea with the space craze of the late ’40s and ’50s, Morrison was eventually able to sell his design—called the Pluto Platter—to Wham-O, a toy company that learned of the pie plates in New England, tweaked the name, and began to distribute the Frisbee we know today. A great choice for illustrating social-emotional skills, particularly resilience, as well as steps of the STEM process, this lighthearted, entertaining selection is full of kid appeal and is sure to provide inspiration and encourage inventive thinking. Period illustrations feature an all-White cast, with people of color appearing in a contemporary park scene.
An appealing true tale of innovation and perseverance.
—Kirkus Reviews