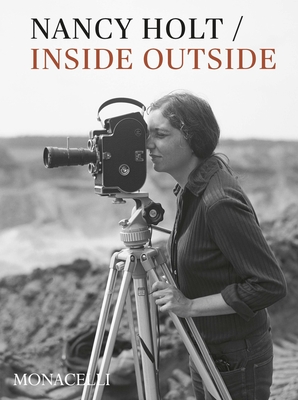 
On Our Shelves Now at:
An in-depth exploration of the pathbreaking works of the landmark artist Nancy Holt, to accompany an exhibition at Bildmuseet, Umeå, Sweden.

Initiating her art practice in 1966 with concrete poetry, she soon expanded her ideas into the landscape, large-scale installations, audio, and video, and film. Through each medium, she explored how we understand our place in the world by investigating perception, both natural and human systems, and site within and outside of traditional museum contexts.

In the mid-1970s Holt completed her most influential earthwork, Sun Tunnels, an artwork central to the definition of land art. Bringing the stars down to earth, Sun Tunnels focuses attention on the systems of the universe. Holt was equally interested in the built environment as she was natural and celestial landscapes, and from the 1980s she made invisible architectural systems visible in ambitious installations that exposed the inner workings of buildings.

Rigorous documentation of Holt’s work, as well as contributions by key scholars, previously unseen photoworks and drawings, and a revealing, never-before-published “self-interview” by the artist bring her work into far fuller context. Developed in close consultation with Holt/Smithson Foundation, an artist-endowed organization dedicated to preserving and extending the work of Nancy Holt and her husband Robert Smithson, this expansive publication will serve as a major contribution to the critical ongoing research into the art of our time.
Nancy Holt (1938–2014) was a member of the Earth, Land, and Conceptual Art movements. A pioneer of site-specific installation and the moving image, Holt recalibrated the limits of art. She expanded the places where art could be found and embraced the new media of her time. Across five decades she asked questions about how we might understand our place in the world, investigating perception, systems, and place. Holt’s rich artistic output spanned concrete poetry, audioworks, film and video, photography, slideworks, ephemeral gestures, drawings, room-sized installations, earthworks, artists’ books, and public sculpture commissions.
Born in Worcester, Mass., she grew up in New Jersey and graduated with a degree in biology from Tufts University in 1960. Later that year she moved to New York City where she met the artist Robert Smithson; the two were married in 1963. Holt’s work is held in major collections including Museum of Modern Art, New York; Museum für Gegenswartkunst, Germany; Utah Museum of Fine Arts; and Whitney Museum of American Art, New York. In 2018 Sun Tunnels and Holes of Light were acquired by Dia Art Foundation, with support from Holt/Smithson Foundation.
Lisa Le Feuvre is the inaugural Executive Director of Holt/Smithson Foundation. Committed to communicating and testing ideas, she has curated exhibitions in museums and galleries across Europe, published writings in international publications and journals, and has played a pivotal role in shaping academic and arts organizations, including as the head of the Henry Moore Institute (2010–17).
Katarina Pierre is director of the Bildmuseet at Umeå University, Sweden. She holds a Master of Arts in Contemporary Art Theory from Goldsmith´s College in London, UK. She has worked at Bildmuseet since 1995, where she has overseen highly acclaimed exhibitions by artists such as Walid Raad, Sara Jordenö, Zineb Seidram, Florian Zeyfang, and Isaac Julien.

'There’s something for everyone, including poems, spoken-word video, films and conceptual work.' - Aesthetica

'The essays and discussion by other writers in this book add thoughtful consideration of theory and practice surrounding Holt’s work. But it is Holt’s own writing, in matter of fact language stripped to essential thought, feeling and material making, that brings the reader closer to the inside and outside of her projects.' - Dr. Beth Williamson, The Art Newspaper