How to Read Marx's Capital: Commentary and Explanations on the Beginning Chapters (Paperback) 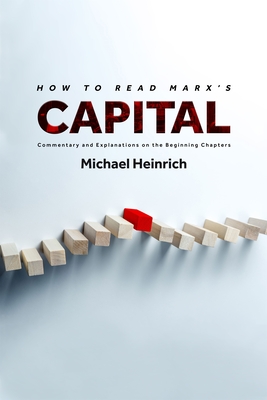 How to Read Marx's Capital: Commentary and Explanations on the Beginning Chapters (Paperback)

With the recent revival of Karl Marx's theory, a general interest in reading Capital has also increased. But Capital--Marx's foundational nineteenth-century work on political economy--is by no means considered an easily understood text. Central concepts, such as abstract labor, the value-form, or the fetishism of commodities, can seem opaque to us as first-time readers, and the prospect of comprehending Marx's thought can be truly daunting. Until, that is, we pick up Michael Heinrich's How to Read Marx's Capital. Paragraph by paragraph, Heinrich provides extensive commentary and lucid explanations of questions and quandaries that arise when encountering Marx's original text. Suddenly, such seemingly gnarly chapters as "The Labor Process and the Valorization Process" and "Money or the Circulation of Capital" become refreshingly clear, as Heinrich explains just what we need to keep in mind when reading such a complex text. Deploying multiple appendices referring to other pertinent writings by Marx, Heinrich reveals what is relevant about Capital, and why we need to engage with it today. How to Read Marx's Capital provides an illuminating and indispensable guide to sorting through cultural detritus of a world whose political and economic systems are simultaneously imploding and exploding.
Michael Heinrich taught economics for many years at the University of Applied Sciences in Berlin and was managing editor of PROKLA: Journal for Critical Social Science. He has written in depth on Marx's critique of political economy in his book, The Science of Value. His An Introduction to the Three Volumes of Karl Marx's Capital is probably the most popular introduction to Marx's economic works in Germany.