A Selection of Legal Maxims (Hardcover) 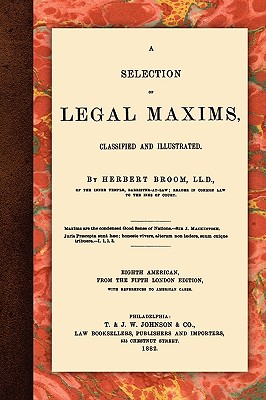 A Selection of Legal Maxims (Hardcover)


Not On Our Shelves—Ships in 1-5 Days
(This book cannot be returned.)
A Substantial Collection of Legal Maxims That is Now an Accepted Classic Each maxim is expertly translated, and enhanced by Broom's knowledgeable explanatory essays that provide the source and meaning, and are in themselves extremely well-annotated. Taken in light of his excellent classification system, Broom's essays will facilitate an understanding of the principles of common law. This popular book obtained a wide circulation and went through many editions, this being a reprint of the eighth (and last) American edition of 1882. Includes an Alphabetical List of Legal Maxims, a Table of Cases and Index. "His is the very best book of the kind extant." -J.G. Marvin, Legal Bibliography 152 Herbert Broom 1815-1822] was educated at Trinity College, Cambridge, and was called to the bar at the Inner Temple in 1840, where he occupied the post of reader of common law. He was the author of two novels and several works on different aspects of law, including Commentaries on the Common Law (1856), Constitutional Law Viewed in Relation to Common Law and Exemplified by Cases (1866) and Philosophy of Law: Notes and Lectures 1876-8. CONTENTS Ch.I. Sec. I. Rules Founded in Public Policy Sec. II. Rules of Legislative Policy Ch. II. Maxims Relating to the Crown Ch. III. Sec. I. The Judicial Office Sec. II. The Mode of Administering Justice Ch. IV. Rules of Logic Ch. V. Fundamental Legal Principles Ch. VI. Acquisition, Enjoyment and Transfer of Property Sec. I. The Mode of Acquiring Property Sec. II. Property-Its Rights and Liabilities Sec. III. The Transfer of Property Ch. VII. Rules Relating to Marriage and Descent Ch. VIII. The Interpretation of Deeds and Written Instruments Ch. IX. The Law of Contracts Ch. X. Maxims Applicable to the Law of Evidence.