A Concise History of the Common Law. Fifth Edition. (Hardcover) 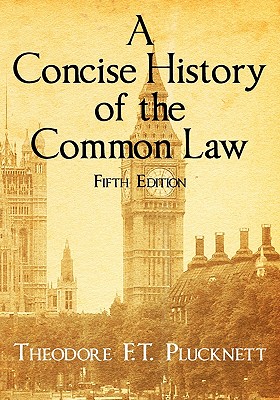 A Concise History of the Common Law. Fifth Edition. (Hardcover)


Not On Our Shelves—Ships in 1-5 Days
(This book cannot be returned.)
The Best Edition of this Classic History: A Comprehensive Legal History of England from the Anglo-Saxon Period through the 19th Century. Theodore Frank Thomas Plucknett 1897-1965] received his LL.B. from the University of Cambridge in 1920. He was a Fellow of the British Academy, Professor of Legal History, University of London, and Assistant Professor of Legal History at Harvard University. He was also the author of Early English Legal Literature (1958) and Edward I and Criminal Law (1960). "Professor Plucknett has such a solid reputation on both sides of the Atlantic that one expects from his pen only what is scholarly and accurate... Nor is the expectation likely to be disappointed in this book. Plucknett's book is not...a mere epitome of what is to be found elsewhere. He has explored on his own account many regions of legal history and, even where the ground has been already quartered, he has fresh methods of mapping it. The title which he has chosen is, in view of the contents of the volume, rather a narrow one. It might equally well have been A Concise History of English Law... In conjunction with Readings on the History and System of the Common Law by Dean Pound...this book will give an excellent grounding to the student of English legal history." --Percy H. Winfield. Harvard Law Review 43 (1929-30) 339-340. " T]his book, comprehensive yet not elementary, clear yet inviting further study on the part of the reader, remains an excellent introduction to legal history and the study of law."-- Harvard Law Review 50 (1937-38) 1012. SELECTED CONTENTS BOOK ONE A General Survey of Legal History Part I The Crown and the State Part II The Courts and the Profession Part III Some Factors in Legal History Book TWO Special Part Part I Procedure Part II Crime and Tort Part III Real Property Part IV Contract Part V Equity Part VI Succession Index.