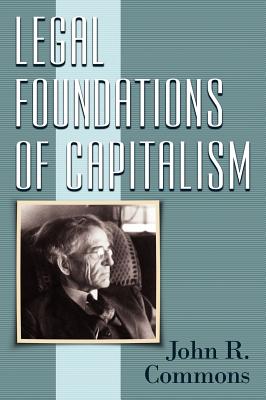 
Not On Our Shelves—Ships in 1-5 Days
(This book cannot be returned.)
CLASSIC STUDY OF AMERICAN LABOR ECONOMICS "This book outlines an evolutionary and behavioral theory of value based on data drawn from court decisions. Analyzing the meaning of reasonable value as defined by the courts, Commons finds that the answer is based on a notion of reasonable conduct. Expanding this point to encompass the habits and customs of social life, he shows that court decisions are based on customs that are powerful forces shaping the economic system. John R. Commons has contributed in one way or another to practically every piece of social and labor legislation that has been enacted in the 20th century." --JACK BARBASH, Monthly Labor Review, May 1989, Vol. 112, No. 5 " An] . . . analysis further along his chosen line than any of his predecessors. Into our knowledge of capitalism he has incorporated a great body of new materials which no one else has used adequately."-- WESLEY MITCHELL, American Economic Review, XIV (1924) 253 John R. Commons 1862-1945] was a Professor of Economics at the University of Wisconsin. He was the author and editor of numerous works, and established his reputation with his editorial contributions to A Documentary History of American Industrial Society (1910-1911). He was the author of The Distribution of Wealth (1893), Institutional Economics (1934) and co-author of the History of Labor in the United States (1918-1935). Commons drafted much of the nationally influential labor legislation for the state of Wisconsin that gave unions legal privileges, offered compulsory unemployment insurance to workers and established the first system of workers' compensation in the United States. Due to these path-breaking reforms, he is considered to be the spiritual father of the Social Security Act.