The Hermetica: The Lost Wisdom of the Pharaohs (Paperback) 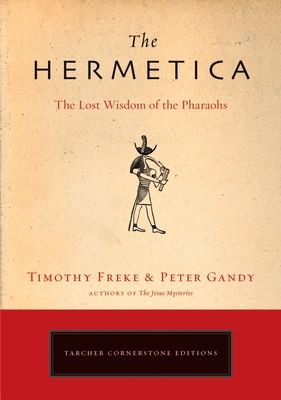 The Hermetica: The Lost Wisdom of the Pharaohs (Paperback)


Not On Our Shelves—Ships in 1-5 Days
The first easily accessible translation of the esoteric writings that inspired some of the world's greatest artists, scientists, and philosophers.

Here is an essential digest of the Greco-Egyptian writings attributed to the legendary sage-god Hermes Trismegistus (Greek for thrice-greatest Hermes), a combination of the Egyptian Thoth and the Greek Hermes.

The figure of Hermes was venerated as a great and mythical teacher in the ancient world and was rediscovered by the finest minds of the Renaissance. The writings attributed to his hand are a time capsule of Egyptian and Greek esoteric philosophy and have influenced figures including Blake, Newton, Milton, Shelley, Shakespeare, Botticelli, Leonardo da Vinci, and Jung.

Providing a fascinating introduction to the intersection of the Egyptian and Hellenic cultures and the magico-religious ideas of the antique world, The Hermetica is a marvelous volume for anyone interested in understanding the West's roots in mystical thought.
Timothy Freke is the author of many books on mystical philosophy, including The Tao Te Ching and, with Peter Gandy, The Complete Guide to World Mysticism. He lives in England.