Mind is the Master: The Complete James Allen Treasury (Paperback) 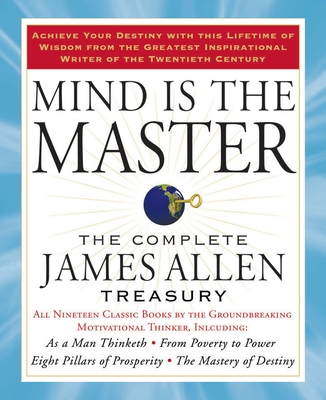 Mind is the Master: The Complete James Allen Treasury (Paperback)


Not On Our Shelves—Ships in 1-5 Days
The classic books of the motivational visionary, collected for the first time in a single volume.

Featuring nineteen beloved works, including As a Man Thinketh, Eight Pillars of Prosperity, The Mastery of Destiny, and From Poverty to Power, here is the first-ever comprehensive and definitive collection of the books of self-help pioneer James Allen.

Formatted in a large, easy-to-read workbook size, with fully redesigned and reset text, Mind Is the Master provides a life­time's worth of wisdom and guidance from one of history's leading voices of self- affirming and motivational philosophy.

Mind Is the Master compiles Allen's most celebrated books, along with little-known gems and posthumous works-such as Foundation Stones to Happiness and Success and Light on Life's Difficulties-awaiting discovery by a whole new generation of readers.

As a special bonus, Mind Is the Master includes a rare remembrance of James Allen by his wife and intellectual partner, Lily Allen. It is an invaluable window on the life and inner world of a writer whose insights touched millions of readers.
James Allen was born in Leicester, England, in 1864. He took his first job at age 15 to support his family, after his father was murdered while looking for work in America. Allen was employed as a factory knitter and a private secretary until the early twentieth century, when he became increasingly known for his motivational writing. His 1903 work As a Man Thinketh earned him worldwide fame as a prophet of inspirational thinking and influenced a who's-who of self-help writers, including Napoleon Hill, Dale Carnegie, and Norman Vincent Peale. Allen died at age 47 in 1912.