Invisible Boy: A Memoir of Self-Discovery (Truth to Power) (Paperback) 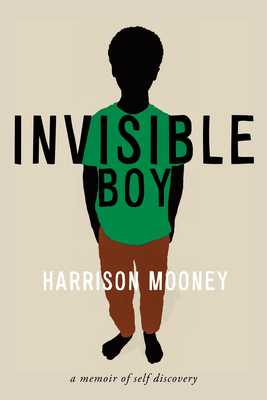 Invisible Boy: A Memoir of Self-Discovery (Truth to Power) (Paperback)


On Our Shelves Now at:
An unforgettable coming-of-age memoir about a Black boy adopted into a white, Christian fundamentalist family

Perfect for fans of Educated, Punch Me Up to the Gods, and Surviving the White Gaze

“An affecting portrait of life inside the twin prisons of racism and unbending orthodoxy.”  --Kirkus Reviews

A powerful, experiential journey from white cult to Black consciousness: Harrison Mooney’s riveting story of self-discovery lifts the curtain on the trauma of transracial adoption and the internalized antiblackness at the heart of the white evangelical Christian movement.

Inspired by Ralph Ellison’s Invisible Man the same way Ta-Nehisi Coates’s Between the World and Me was inspired by James Baldwin, Harrison Mooney’s debut memoir will captivate readers with his powerful gift for storytelling, his keen eye for insight and observation, and his wry sense of humor.

As an adopted and homeschooled Black boy with ADHD at white fundamentalist Christian churches and tent revivals, Mooney was raised amid a swirl of conflicting and confusing messages and beliefs. Within that radical and racist right-wing bubble along the U.S. border in Canada's Bible Belt, Harrison was desperate to belong and to be "visible" to those around him.

But before ultimately finding his own path, Harrison must first come to understand that the forces at work in his life were not supernatural, but the same trauma and systemic violence that has terrorized Black families for generations. Reconnecting with his birth mother--and understanding her journey--leads Harrison to a new connection with himself: the eyes looking down were my true mother’s eyes, and the face was my true mother’s face, and for the first time in my life, I saw that I was beautiful.
Harrison Mooney is an award-winning writer and journalist from Vancouver. Prior to penning his debut memoir, Harrison worked for The Vancouver Sun for nearly a decade as a reporter, editor and columnist. His writing has also appeared in the National Post, Yahoo, The Guardian, and Macleans. He lives in East Vancouver with his family.

“Invisible Boy is told with a vibrancy unique to the author. Mooney’s generosity of spirit, his sense of humour and capacity to transcend the self creates a book that is as riveting as it is incendiary.”
--The Tyee

“An affecting portrait of life inside the twin prisons of racism and unbending orthodoxy.”
--Kirkus Reviews

"A stark and startling memoir, Mooney's vital story depicts the violence of transracial adoption in the all-too-frequent cases where white parents simply decline to engage with the realities facing their non-white children."
--Booklist

“Invisible Boy is a touching memoir about heritage, religion, and race.”
--Foreword Reviews

“A harrowing account of a childhood spent wrestling with big questions while an adoptive family offers all the wrong answers. I couldn’t get enough of young Harrison Mooney’s determination to understand racism and the casually cruel ideas that animated his reactionary religious upbringing. Invisible Boy cuts deep with just-in-time insights about faith, family, and coming of age in a deeply flawed world.”
--Sarah Berman, author of Don’t Call It a Cult