The Dhammapada: A New Translation of the Buddhist Classic with Annotations (Paperback) 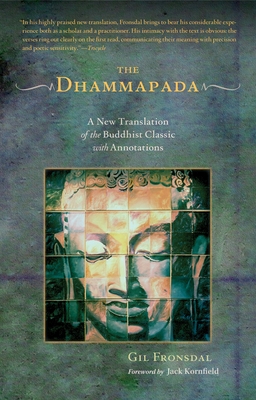 The Dhammapada: A New Translation of the Buddhist Classic with Annotations (Paperback)

By Jack Kornfield (Foreword by), Gil Fronsdal (Translated by)


Backordered
A Buddhist scholar and Insight Meditation teacher presents the most universally beloved scriptures of Buddhism in this “clear, concise, and inspiring” translation that “brings these timeless passages of the Buddha right into our hearts” (Joseph Goldstein)

The Dhammapada is the most widely read Buddhist scripture in existence, enjoyed by both Buddhists and non-Buddhists. This classic text of teaching verses from the earliest period of Buddhism in India conveys the philosophical and practical foundations of the Buddhist tradition. The text presents two distinct goals for leading a spiritual life: the first is attaining happiness in this life (or in future lives); the second goal is the achievement of spiritual liberation, freedom, absolute peace. Many of the key themes of the verses are presented in dichotomies or pairs, for example, grief and suffering versus joy; developing the mind instead of being negligent about one's mental attitude and conduct; virtuous action versus misconduct; and being truthful versus being deceitful. The purpose of these contrasts is, very simply, to describe the difference between what leads to desirable outcomes and what does not.

For centuries, this text has been studied in its original Pali, the canonical language of Buddhism in Southeast Asia. This fresh new translation from Insight Mediation teacher and Pail translator Gil Fronsdal is both highly readable and scholarly authoritative. With extensive explanatory notes, this edition combines a rigorous attention to detail in bringing forth the original text with the translator's personal knowledge of the Buddhist path. It is the first truly accurate and highly readable translation of this text to be published in English.
Gil Fronsdal has practiced Zen and Insight Meditation since 1975 and has a PhD in Buddhist Studies from Stanford University. He has trained in both the Japanese Soto Zen tradition (San Francisco Zen Center with Suzuki Roshi) and the Insight Meditation school of Theravada Buddhism from Southeast Asia. Gil was trained as a Vipassana teacher by Jack Kornfield and is part of the Vipassana teachers' collective at Spirit Rock Meditation Center. He was ordained as a Soto Zen priest at the San Francisco Zen Center, and in 1995 received Dharma Transmission from Mel Weitsman, the abbot of the Berkeley Zen Center. He has been the primary teacher for the Insight Meditation Center, in Redwood City, California, since 1990. He is a husband and father of two boys.
“In his highly praised new translation, Fronsdal brings to bear his considerable experience both as a scholar and a practitioner. His intimacy with the text is obvious: the verses ring out clearly on the first read, communicating their meaning with precision and poetic sensitivity.”
—Tricycle

“It's always valuable to go back to the Dhammapada, that most-beloved and oft-translated of Buddhist texts. The publication of Gil Fronsdal's new translation gives us an excellent opportunity to do so. Fronsdal takes care in his choice of words and draws out subtleties of meaning with important significance for people who practice meditation.”
—Shambhala Sun

“What sets this particular version apart is that its verses remain true to the original Pali, the canonical language of Buddhism in Southeast Asia. . . . With its easily readable blend of literary sensitivity and clarity of text, this new edition of the Dhammapada is a highly recommended addition to the practitioner's library of classical spiritual texts.”
—The Beacon

“A fine new translation of an ancient classic. Fronsdal's balance of fidelity to the text and sensitivity to its spirit is perfect. A book to be treasured.”
—Carl Bielefeldt, Stanford University

“The language is clear, precise, and inspiring, the phrasing spare and elegant, and the depth of these wisdom teachings apparent on every page. Gil's wonderful work brings these timeless passages of the Buddha right into our hearts. Highly recommended.”
—Joseph Goldstein, author of One Dharma

“At last a translation of the Dhammapada that combines academic precision and a heartfelt commitment to Buddhist practice. Gil Fronsdal's version of this classic text will set a new standard for scholars and practitioners alike.”
—Stephen Batchelor, author of Buddhism without Beliefs and Living with the Devil

“I have read many Dhammapada translations in several languages, but never have I come across such a crisp, precise, and lucid translation as this.”
—Bhante Gunaratana, Bhavana Society