The Essence of Religion (Great Books in Philosophy) (Paperback) 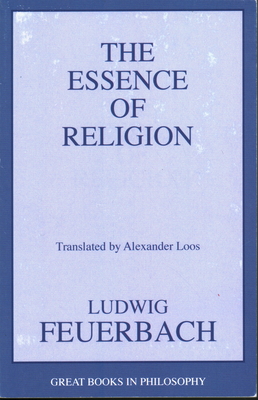 The Essence of Religion (Great Books in Philosophy) (Paperback)


Special Order—Subject to Availability
Originally published in 1845, this concise critique formed the basis of thirty later lectures delivered in 1848 by Ludwig Feuerbach, one of Germany’s most influential humanist philosophers. In The Essence of Religion Feuerbach applied the analysis expounded in The Essence of Christianity (1841) to religion as a whole. The main thrust of Feuerbach’s argument is aptly summed up in the original subtitle to this work: "God the Image of Man. Man’s Dependence upon Nature the Last and Only Source of Religion." Feuerbach reviews key aspects of religious belief and in each case explains them as imaginative elaborations of the primal awe and sense of dependence that humans experience in the face of nature’s power and mystery. Rather than humans being created in the image of God, the situation is quite the reverse: "All theology is anthropology," he says, and "the being whom man sets over against himself as a separate supernatural existence is his own being."
Feuerbach goes on to argue that the attributes of God are no more than reflections of the various needs of human nature. Further, as human civilization has advanced, the role of God has gradually diminished. In ancient times, before human beings had any scientific understanding of the way nature works, divine powers were seen behind every natural manifestation, from lightning bolts to the change of seasons. By contrast, in the modern era, when an in-depth understanding of natural causes has been achieved, there is no longer any need to imagine God behind the workings of nature: "He who for his God has no other material than that which natural science, philosophy, or natural observation generally furnishes to him . . . ought to be honest enough also to abstain from using the name of God, for a natural principle is always a natural essence and not what constitutes the idea of a God."
Feuerbach’s naturalistic philosophy had a decisive influence on Karl Marx and radical theologians such as Bruno Bauer and David Friedrich Strauss. His incisive critique remains a challenge to religion to this day.
Ludwig Feuerbach (1804-1872) was a highly respected nineteenth-century philosopher who focused on the study of post-Hegelian philosophy, idealism, naturalism, materialism, and positivism. Feuerbach’s book, The Essence of Christianity, is noted as an influential atheist text, and helped inspire the work of Karl Marx and Friedrich Engels. Feuerbach was educated at the University of Berlin.