The Legacy of Jihad: Islamic Holy War and the Fate of Non-Muslims (Paperback) 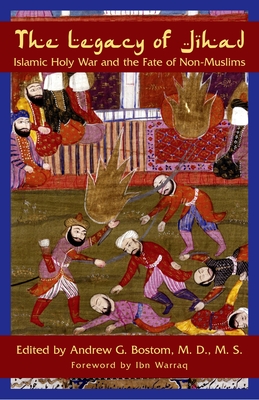 The Legacy of Jihad: Islamic Holy War and the Fate of Non-Muslims (Paperback)


Not On Our Shelves—Ships in 1-5 Days
This book reveals how, for well over a millennium and across three continents - Asia, Africa, and Europe - non-Muslims who were vanquished by jihad wars became forced tributaries (called dhimmi in Arabic) in lieu of being slain. Under the dhimmi religious caste system, non-Muslims were subjected to legal and financial oppression, as well as social isolation. Extensive primary and secondary source materials, many translated here for the first time into English, are presented, making clear that jihad conquests were brutal, imperialist advances, which spurred waves of Muslims to expropriate a vast expanse of lands and subdue millions of indigenous peoples. Finally, the book examines how jihad war, as a permanent and uniquely Islamic institution, ultimately regulates the relations of Muslims with non-Muslims to this day. Scholars, educators, and interested lay readers will find this collection an invaluable resource.
Andrew G. Bostom is the editor of the highly acclaimed The Legacy of Jihad: Islamic Holy War and the Fate of Non-Muslims and of The Legacy of Islamic Antisemitism: From Sacred Texts to Solemn History. He is the author of Sharia versus Freedom: The Legacy of Islamic Totalitarianism. He has also published articles and commentary on Islam in the Washington Times, National Review Online, Revue Politique, FrontPageMagazine.com, American Thinker, and other print and online publications. More on Bostom's work can be found at www.andrewbostom.org/blog/.
"[P]rovides a comprehensive history of jihad."
- Middle East Journal

"[A]n impressive compendium that meticulously documents the terror that is jihad.…an unparalleled documentary history of nearly 14 centuries of jihad, and of the non-Muslims who have been subjugated as a result of that relentless campaign. His account is a sober warning of the mortal challenge posed to free societies by the ongoing jihad of the militants."
- National Review