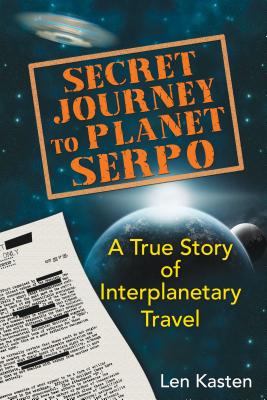 
On Our Shelves Now at:
Documents how 12 people, as part of a top-secret U.S. government program, traveled to the planet Serpo and lived there for 13 years

On July 16, 1965, a massive alien spacecraft from the Zeta Reticuli star system landed at the Nevada test site north of Las Vegas. Following a plan set in motion by President Kennedy in 1962, the alien visitors known as the Ebens welcomed 12 astronaut-trained military personnel aboard their craft for the 10-month journey to their home planet, Serpo, 39 light-years away. In November 2005, former and current members of the Defense Intelligence Agency--directed by Kennedy to organize the Serpo exchange program--came forward to reveal the operation, including details from the 3,000-page debriefing of the 7 members of the Serpo team who returned after 13 years on the planet.

Working with the DIA originators of the Serpo project and the diary kept by the expedition’s commanding officer, Len Kasten chronicles the complete journey of these cosmic pioneers, including their remarkable stories of life on an alien planet, superluminal space travel, and advanced knowledge of alien technologies. He reveals how the Ebens presented the U.S. with “The Yellow Book”--a complete history of the universe recorded holographically, allowing the reader to view actual scenes from pre-history to the present. He explains how the Ebens helped us reverse-engineer their antigravity spacecraft and develop technology to solve our planet-wide energy problems--knowledge still classified.

Exposing the truth of human-alien interaction and interplanetary travel, Kasten reveals not only that the Ebens have returned to Earth eight times but also that our government continues to have an ongoing relationship with them--a relationship with the potential to advance the human race into the future.
Len Kasten is a UFO researcher and freelance writer. He intensively studied the Edgar Cayce Readings at the A.R.E. in Virginia Beach and has been a lifelong devotee of astrology and theosophy. He is a former member of the National Investigations Committee on Aerial Phenomena (NICAP) and the Mutual UFO Network (MUFON), and he is the president of the American Philosopher Society. He has been a feature writer, with more than 50 published articles, for Atlantis Rising magazine. He lives in Casa Grande, Arizona.
“I cannot overemphasize the importance of this book. Kasten has cast the bright light of scholarship on a subject that cries for understanding and will change our world and everything that we have come to believe about ourselves and our place in the universe. The shocking truth is, we are not alone and have never been alone.”
— Robert O. Dean, Command Sgt. Major, U.S. Army, retired

“Len Kasten’s work is abundant ad infinitum with similar and truthful mind bending revelations known only to insiders; this is a monumental accomplishment. No Ufology’s library is complete without Secret Journey to Planet Serpo. The book is a masterpiece!! Rating: 5 Stars all the way.”
— Art, UFOs, and Supernatural Magazine, August 2013

“Secret Journey to Planet Serpo was a ‘mind-blower’ for me. A well-written, easy read, with numerous b&w illustrations and 27 colour plates, I think it will test your powers for discerning its credibility and make you begin to wonder what else of monumental importance is being withheld from the citizens of earth.”
— Alan Glassman, New Dawn, November 2013