All the Devils Are Here: The Hidden History of the Financial Crisis (Paperback) 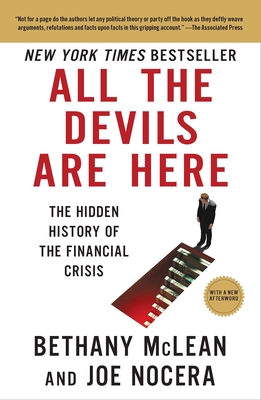 All the Devils Are Here: The Hidden History of the Financial Crisis (Paperback)

According to Bethany McLean and Joe Nocera, two of America's most acclaimed business journalists, the real answer is all of the above-and more. Many devils helped bring hell to the economy. And the full story, in all of its complexity and detail, is like the legend of the blind men and the elephant. Almost everyone has missed the big picture. Almost no one has put all the pieces together.

All the Devils Are Here goes back several decades to weave the hidden history of the financial crisis in a way no previous book has done. It explores the motivations of everyone from famous CEOs, cabinet secretaries, and politicians to anonymous lenders, borrowers, analysts, and Wall Street traders. It delves into the powerful American mythology of homeownership. And it proves that the crisis ultimately wasn't about finance at all; it was about human nature.

Bethany McLean and Peter Elkind are Fortune senior writers. McLean, a former investment banking analyst for Goldman Sachs, lives in New York City. Her March 2001 article in Fortune, "Is Enron Overpriced?," was the first in a national publication to openly question the company's dealings.