A Death on Diamond Mountain: A True Story of Obsession, Madness, and the Path to Enlightenment (Hardcover) 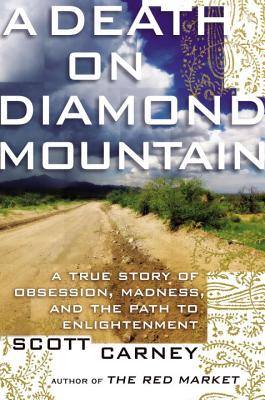 A Death on Diamond Mountain: A True Story of Obsession, Madness, and the Path to Enlightenment (Hardcover)


Special Order—Subject to Availability
An investigative reporter explores an infamous case where an obsessive and unorthodox search for enlightenment went terribly wrong. When thirty-eight-year-old Ian Thorson died from dehydration and dysentery on a remote Arizona mountaintop in 2012, The New York Times reported the story under the headline: "Mysterious Buddhist Retreat in the Desert Ends in a Grisly Death." Scott Carney, a journalist and anthropologist who lived in India for six years, was struck by how Thorson's death echoed other incidents that reflected the little-talked-about connection between intensive meditation and mental instability. Using these tragedies as a springboard, Carney explores how those who go to extremes to achieve divine revelations--and undertake it in illusory ways--can tangle with madness. He also delves into the unorthodox interpretation of Tibetan Buddhism that attracted Thorson and the bizarre teachings of its chief evangelists: Thorson's wife, Lama Christie McNally, and her previous husband, Geshe Michael Roach, the supreme spiritual leader of Diamond Mountain University, where Thorson died. Carney unravels how the cultlike practices of McNally and Roach and the questionable circumstances surrounding Thorson's death illuminate a uniquely American tendency to mix and match eastern religious traditions like LEGO pieces in a quest to reach an enlightened, perfected state, no matter the cost. Aided by Thorson's private papers, along with cutting-edge neurological research that reveals the profound impact of intensive meditation on the brain and stories of miracles and black magic, sexualized rituals, and tantric rites from former Diamond Mountain acolytes, A Death on Diamond Mountain is a gripping work of investigative journalism that reveals how the path to enlightenment can be riddled with danger.
Scott Carney speaks Hindi and has spent six years living in India. He is a contributing editor at WIRED, and his work has also appeared in Playboy, The New York Times Magazine, Mother Jones, Details, Discover, Outside, Fast Company, and Foreign Policy. His first book, The Red Market, won the 2012 Clarion Award for best nonfiction book. He currently lives in Los Angeles.