Sacred Mushroom of Visions: Teonanácatl: A Sourcebook on the Psilocybin Mushroom (Paperback) 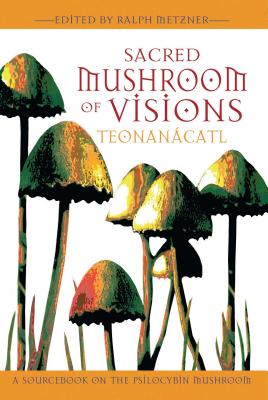 Sacred Mushroom of Visions: Teonanácatl: A Sourcebook on the Psilocybin Mushroom (Paperback)


Not On Our Shelves—Ships in 1-5 Days
Over 30 contributors share their expertise on the chemical, biological, cultural, psychological, and experiential dimensions of psilocybin mushrooms

Teonanácatl was the name given to the visionary mushrooms used in ancient Mesoamerican shamanic ceremonies, mushrooms that contain psilocybin, the psychoactive agent identified by Swiss chemist Albert Hofmann, the discoverer of LSD. The rediscovery of these visionary mushrooms by the Mazatec healer Maria Sabina and mycologist R. Gordon Wasson ignited a worldwide mushroom culture that inspired the consciousness revolution of the 1960s.

This book describes in vivid detail the consciousness-expanding experiences of psychoactive mushroom users--from artists to psychologists--and the healing visionary inspiration they received. It provides firsthand accounts of studies performed in the controversial Harvard Psilocybin Project, including the Concord Prison study and the Good Friday study. It describes how the use of the psilocybe mushroom spread from the mountains of Mexico into North America, Asia, and Europe by seekers of consciousness-expanding experiences. It also details how psilocybin has been used since the 1960s in psychotherapy, prisoner rehabilitation, the enhancement of creativity, and the induction of mystical experiences and is being studied as a treatment for obsessive compulsive disorder (OCD).
Ralph Metzner (1936–2019) obtained his Ph.D. in Clinical Psychology at Harvard University, where he collaborated with Timothy Leary and Richard Alpert on psychedelic research. He was Professor Emeritus at the California Institute of Integral Studies in San Francisco and president and co-founder of the Green Earth Foundation. Dr. Metzner is the author of numerous books, including Overtones and Undercurrents, Searching for the Philosophers’ Stone, and Green Psychology.
"A compilation of scientific information, historical lore, and experiential reports about the magical psilocybe mushrooms. . . . It is sure to be treasured for years to come."
— Andrew Weil, M.D., author of The Natural Mind: A New Way of Looking at Drugs and the Higher Consciou

"An outstanding comprehensive gathering of vital information from the psychedelic world."
— Myron Stolaroff, author of The Secret Chief and From Thanatos to Eros

"One gets the impression when finishing the Sacred Mushroom of Visions that the many dimensions of psilocybin offer humanity a truly wonderful gift; for personal experience, for scientific research, and as a light through which the environment discourse of the modern age can be shone. If you have an interest, indeed a belief, in entheogenic, empathogenic, (as many of the narratives elude to) shamanism, or simply mycology, then this book is a must for your shelf."
— Psychedelic Press, UK, March 2010