The Gospel of Thomas: The Gnostic Wisdom of Jesus (Paperback) 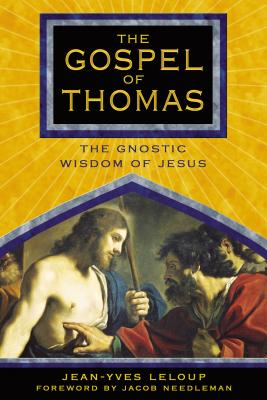 The Gospel of Thomas: The Gnostic Wisdom of Jesus (Paperback)

• Explores the gnostic significance of Jesus's teachings recorded in this gospel

One of the cache of codices and manuscripts discovered in Nag Hammadi, the Gospel of Thomas, unlike the canonical gospels, does not contain a narrative recording Christ's life and prophecies. Instead it is a collection of his teachings--what he actually said. These 114 logia, or sayings, were collected by Judas Didymus Thomas, whom some claim to be Jesus's closest disciple. No sooner was this gospel uncovered from the sands of Upper Egypt than scholars and theologians began to bury it anew in a host of conflicting interpretations and polemics. While some say it is a hodgepodge from the canonical gospels, for others it is the source text from which all the gospel writers drew their material and inspiration.

In this new translation of the Gospel of Thomas, Jean-Yves Leloup shows that the Jesus recorded by the "infinitely skeptical and infinitely believing" Thomas has much in common with gnostics of non-dualistic schools. Like them, Jesus preaches the coming of a new man, the genesis of the man of knowledge. In this gospel, Jesus describes a journey from limited to unlimited consciousness. The Jesus of Thomas invites us to drink deeply from the well of knowledge that lies within, not so that we may become good Christians but so we may attain the self-knowledge that will make each of us, too, a Christ.
Jean-Yves Leloup is a theologian and founder of the Institute of Other Civilization Studies and the International College of Therapists. His books include Jesus and Judas, The Sacred Embrace of Jesus and Mary, The Gospel of Mary Magdalene, The Gospel of Philip, and The Gospel of Thomas. He lives in France.

Jacob Needleman is a professor of philosophy at San Francisco State University and the author of many books, including The Essential Marcus Aurelius, Why Can't We Be Good?, The American Soul, The Wisdom of Love, Time and the Soul, The Heart of Philosophy, Lost Christianity, and Money and the Meaning of Life.
"Among all the astonishing documents unearthed in 1945 near the desert village of Nag Hammadi, the Gospel of Thomas has made the greatest impact on our understanding of Christianity. . . . The words in this text have the power to touch an unknown part of ourselves that brings with it an undeniable recognition of truth and hope."
— Jacob Needleman, author of Lost Christianity and The American Soul

"In this remarkable book, scholar-mystic Jean-Yves Leloup invites us to meditate on the ‘eternal jewel,’ the revelation of Jesus, and on the reign of God spread all around us, within and without. May these logia of Jesus translated from the Gospel of Thomas fall on good soil and yield a bountiful harvest of peace, justice, and enlightenment."
— Margaret Starbird, author of The Woman with the Alabaster Jar: Mary Magdalen and the Holy Grail

"Leloup (The Gospel of Mary Magdalene; The Gospel of Philip), founder of the Institute of Other Civilization Studies and the International College of Therapists, reminds readers early in his introduction that 'whether we like it or not, Yeshua of Nazareth was not a writer. It is therefore impossible to speak of 'the authentic words of Jesus'.' Because spoken words, later recorded, bear the indelible imprint of the listener, Leloup emphasizes that they represent only part of the truth; he invites us to consider the Gospels as a whole as '[d]ifferent points of view that exist both within us and outside of us, in historical and meta-historical dimensions.' Thus he humbly offers his translation as one among many. Following the complete text of the Gospel of Thomas, presented in both Coptic and an elegantly translated English (by Joseph Rowe, from the French) Leloup delicately unfolds its petals of meaning, logion (saying) by logion. Simultaneously inspiring and enlightening, his interpretation far surpasses mere exegesis, instead intricately melding the now with the then, the self with the Christ. Paraphrases from Meister Eckhart intermingle with quotations from Kafka and Dostoyevski, which coincide with wide-ranging religious references--from Judaism and Greek Orthodoxy to Krishnamurti and Shankara. If ever a translation of Thomas's gospel merited a place in a reader's back pocket, this is it."
— Publisher's Weekly, March 14, 2005

"I'm very impressed with this new book on the Gospel of Thomas, and even the Forward offers much insight and depth. In his Forward, Jacob Needleman suggests that the proper work of the mind is to function at two levels: the level of silence and the level of expression, with the former being superior to the latter, and that the wisdom borne out of the depths of contemplative silence is what's dangerously lacking in the world today, what he calls 'the tragedy of our modern era.' 'What our modern world has suffered from most of all is runaway ideology, the agitated attachment to ideas that thereby become the playthings of infrahuman energies. This is the great danger of all ideologies, whether political, religious, or academic.' He observes that the energy that must guide us can only come from another, higher level within the human psyche, 'a level that is experienced as silence.'

"The Format: The first section of Jean-Yves Leloup's latest book presents the text of the Gospel of Thomas in the Coptic language on the left-hand pages, and the English translations on the pages to the right. Even if you have other versions of Thomas, it would be quite useful to also have this one, as there are some important differences. The rest of the book consists of the commentary on each of the one hundred fourteen proverbs and parables of 'Yeshua the Living One,' many of which seem as terse and enigmatic as Zen koans, the mystic-wisdom of an Eastern Sage. The collection begins with this mysterious statement: 'Whoever lives the interpretation of these words will no longer taste death.'

"At last! someone who is a contemplative soul has published some valuable reflections on this Gnostic Gospel found at Nag Hammadi in Egypt. In The Gospel of Thomas, Jean-Yves Leloup presents not so much a commentary on these ancient sayings of Yeshua, but a meditation 'that arises from the tilled earth of our silence.' He says that 'it is from this ground of inner silence, rather than from mental agitation, that these words of Yeshua can bear their fruit of Light.' He writes, 'Pope Gregory I said that only a prophet could understand the prophets. And it is said that only a poet can understand a poet. Who, then, must we be in order to understand Yeshua?' Perhaps only a lover of Gnosis can truly appreciate the wisdom of a Gnostic Gospel. Leloup is the founder of the Institute of Other Civilization Studies and the International College of Therapists. His other books include the bestselling, The Gospel of Mary Magdalene and The Gospel of Philip."
— James Bean, Spiritual Awakening Radio Productions

"If you're looking for a coherent translation and commentary of The Gospel of Thomas I think this is it."
— Blue Flame Magick Blog at Word Press, October 2010