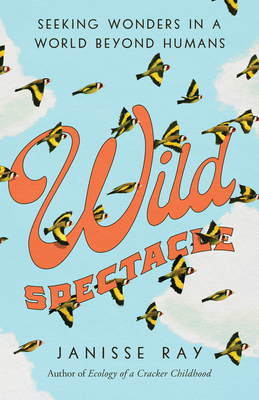 
Not On Our Shelves—Ships in 1-5 Days
Looking for adventure and continuing a process of self-discovery, Janisse Ray has repeatedly set out to immerse herself in wildness, to be wild, and to learn what wildness can teach us. From overwintering with monarch butterflies in Mexico to counting birds in Belize, the stories in Wild Spectacle capture her luckiest moments--ones of heart-pounding amazement, discovery of romance, and moving toward living more wisely. In Ray's worst moments she crosses boundaries to encounter danger and embrace sadness. Anchored firmly in two places Ray has called home--Montana and southern Georgia--the sixteen essays here span a landscape from Alaska to Central America, connecting common elements in the ecosystems of people and place. One of her abiding griefs is that she has missed the sights of explorers like Bartram, Sacagawea, and Carver: flocks of passenger pigeons, routes of wolves, herds of bison. She craves a wilder world and documents encounters that are rare in a time of disappearing habitat, declining biodiversity, and a world too slowly coming to terms with climate change. In an age of increasingly virtual, urban life, Ray embraces the intentionality of trying to be a better person balanced with seeking out natural spectacle, abundance, and less trammeled environments. She questions what it means to travel into the wild as a woman, speculates on the impacts of ecotourism and travel in general, questions assumptions about eating from the land, and appeals to future generations to make substantive change. Wild Spectacle explores our first home, the wild earth, and invites us to question its known and unknown beauties and curiosities.
Janisse Ray is a naturalist and activist, and the author of seven books of nonfiction and poetry, including The Seed Underground: A Growing Revolution to Save Food, Drifting into Darien: A Personal and Natural History of the Altamaha River, and Ecology of a Cracker Childhood, which won the American Book Award. Her work has appeared widely in magazines and journals, and she is the recipient of a Pushcart Prize, the Nautilus Book Award, and numerous other honors. Ray lives on an organic farm near Savannah, Georgia