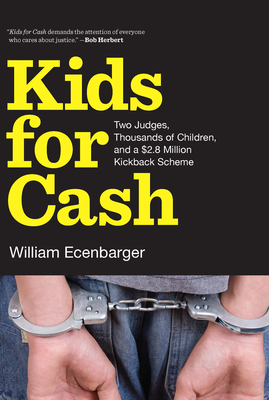 From the Pulitzer Prize-winning Philadelphia Inquirer reporter William Ecenbarger comes the expos of a shocking scandal that ruined thousands of young lives. As the Boston Globe wrote, "the story is incredible: thousands of children wrongfully sentenced to juvenile detention centers, many without legal representation and after cursory hearings, by two rogue judges in northern Pennsylvania who received millions of dollars in bribes from the private institutions' owners." The story has all the elements of a true-crime legal thriller--mafia connections, colorful characters, corruption--and was made into a documentary of the same title released in theaters in 2014. But the survivors of the harrowing ordeal have finally gotten some justice: in August 2022, it was ordered that the disgraced judges must pay hundreds of millions of dollars in compensatory and punitive damages to the victims.

When it was first released, Kids for Cash brought the story to national attention, where it has stayed ever since. As the Philadelphia Inquirer pointed out, this is the "worst stain on Pennsylvania, a state with more than its share of stains. . . . Ecenbarger offers a detail-packed, sickening account of the scandal and its impact. Anyone caring about courts, justice, or children should read it."

William Ecenbarger was part of a Philadelphia Inquirer reporting team that was awarded a Pulitzer Prize for their coverage of the Three Mile Island nuclear accident. Once an international correspondent for Reader's Digest, he has been published in the Washington Post, the Los Angeles Times, Smithsonian Magazine, Esquire, Audubon, and other leading newspapers and magazines. He is also the author of Walkin' the Line, a travel-history narrative about the Mason-Dixon Line. He lives with his wife, a travel photographer, in Hershey, Pennsylvania.

If only this were fiction. William Ecenbarger deserves our gratitude for shining the brightest of spotlights on a tragic, scandalous situation that brought pain and devastation to the lives of countless children and their families. Kids for Cash demands the attention of everyone who cares about justice.” Bob Herbert, Distinguished Senior Fellow at Demos and former New York Times Op-Ed columnist

A chilling account of how two Pennsylvania judges traded children's freedom for personal profit while the rest of the Commonwealth looked the other way. Parents will tuck their children in a bit tighter after reading this true-crime heart-stopper.” Nell Bernstein, award-winning journalist and author of All Alone in the World: Children of the Incarcerated

William Ecenbarger exposes Pennsylvania’s recent juvenile justice disgrace wherein thousands of youth were illegally sentenced to a private detention facility in exchange for millions in kickbacks for the judges who sentenced them. His heartfelt, articulate outrage raises disturbing and critical questions about the destructive power of greed in our criminal justice system, and the legal and social systems that support it through silent acquiescence.” Tara Herivel, attorney, author and co-editor of Prison Profiteers: Who Makes Money from Mass Incarceration and Prison Nation: The Warehousing of America's Poor

A gripping and inspirational must read’ for anyone concerned about the health and well-being of children.” Liz Ryan, President and CEO of Campaign for Youth Justice

A gripping story of judicial incompetence, a system that ignored it, and the thousands of kids scarred for lifea story that begs for juvenile justice reform across America.” Steven C. Teske, Chief Judge, Juvenile Court of Clayton County, GA, author of Reform Juvenile Justice Now

An unimaginable story of abuse, greed, and corruption that also reveals the broader problems with our society's failure to protect some of its most vulnerable, powerless, and at-risk membersa critically important book.” Bryan Stevenson, founder and executive director of the Equal Justice Initiative, New York University Professor of Clinical Law

"This expose of judicial indiscretion, greed, and money laundering reads like a thriller. The setting is the Luzerne County, PA, juvenile court system between 2003 and 2008, when two judges mishandled the criminal cases of thousands of children. After presenting a rather unflattering history of the region, citing a culture of corruption,’ Pulitzer Prizewinning journalist [William] Ecenbarger describes the background and criminal activities that form the heart of the case. The book is based on 200 interviews and reflects the author’s insider knowledge of the scandal, which he covered for the Philadelphia Enquirer. . . . A solid, shocking work of investigative journalism, recommended for civic-minded general readers and students of juvenile justice issues."
Library Journal