In the Blink of an Eye: An Autobiography (Hardcover) 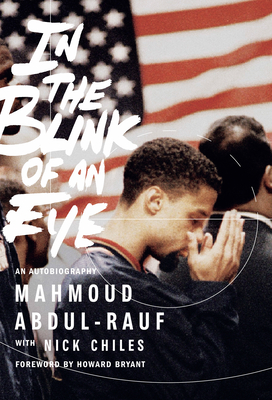 In the Blink of an Eye: An Autobiography (Hardcover)

By Mahmoud Abdul-Rauf, Nick Chiles (With)


On Our Shelves Now at:
In an autobiography marked by staggering vulnerability, former NBA star Mahmoud Abdul-Rauf-whose given name was Chris Jackson before converting to Islam and changing it in 1991-recounts the twists, turns, trials, and triumphs of his life. He is perhaps most well-known for being exiled from the league for praying--instead of standing and saluting the flag - during the playing of "The Star-Spangled Banner" before games throughout the 1995-96 season. Abdul-Rauf's protest sent shockwaves through the NBA that can still be felt today. With wit and candor, Abdul-Rauf tells the story of how he rose to the top of his game--only to have his career taken away in the blink of an eye when he stood up for his principles. He also recounts his experiences living with Tourette Syndrome, committing his life to the Islamic faith, and growing up estranged from his father. In the Blink of an Eye challenges readers to examine our own lives by asking what we value, how we want to be remembered, and how we can contribute to making the world a better place. Through evocative passages that place the reader in the heat of the moment as well as poignant portraits of the important people in his life, In the Blink of an Eye will capture the attention of readers from all walks of life. This book is a must-read for anyone who has faced down adversity by standing up for the integrity of their own life, path, and identity. From his confrontations with racism--including the burning down of his house--to his difficult relationship with some of his closest family members, Adbul-Rauf reveals in intimate detail the important and inspirational, if painful, episodes that shaped his life.
Mahmoud Abdul-Rauf (born Chris Jackson) is a world-renowned professional basketball player who grew up in Gulfport, Mississippi. He first caught the nation's attention in 1988 as a Louisiana State University (LSU) freshman sensation. That year he averaged 30.2 points per game, an NCAA record that stands to this day. In 1990, he entered the NBA after his sophomore year and was drafted 3rd overall by the Denver Nuggets. In 1991, he converted to Islam and took the same Mahmoud Abdul-Rauf. By the 1995-1996 season, Abdul-Rauf was unmatched on the court, scoring 51 against the seemingly unbreakable Utah Jazz, 32 on Michael Jordan, and leading his team in both points and assists. It was shortly before this time that Abdul-Rauf decided he would no longer stand for the national anthem, viewing the American flag as a symbol of oppression and racism. The NBA temporarily suspended Abdul-Rauf, and soon he was traded to the Sacramento Kings, where he was kept on the bench much of the time. After his contract expired, he found himself shunned by every NBA team, effectively forced out of the league. Today, Abdul-Rauf plays in the BIG3 basketball league where he was named co-captain of his team and led them to consecutive playoff and semi-finals games. He continues to participate in many speaking engagements around the world encouraging people to stand up for their principles. Abdul-Rauf lives in Atlanta, Georgia.