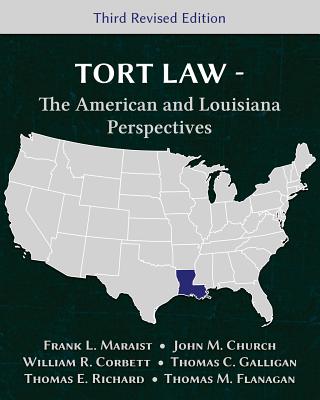 Tort Law: The American and Louisiana Perspectives, Third Revised Edition has as its primary objective a study of tort law in the United States and Louisiana. It differs from most other torts casebooks, however, in that it has a secondary objective of providing an exercise in comparative law. In the United States, we often overlook the fact that the common law system that prevails in our nation is not the only legal system in the world. Much of the world applies a civil law approach in which a civil code has a more prominent role than case law. In a world in which trade and economics, politics, and law cross national borders, it has become increasingly important to be aware of and conversant in other nations' legal systems. Louisiana, the only state in the United States that can be described as a mixed jurisdiction, using both civil law and common law, provides an excellent model for examining and comparing and contrasting civil law and common law approaches to various legal issues.

This book invites the reader to both study tort law and consider the differences and similarities between the common law states and a state that has a civil code and views the role of the courts and the legislature somewhat differently.