A Carpenter's Life as Told by Houses (Compact Disc) 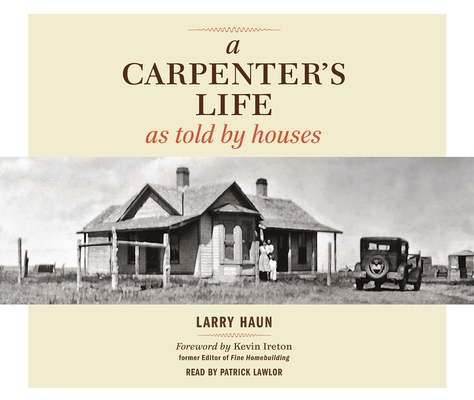 A Carpenter's Life as Told by Houses (Compact Disc)

From one of Fine Homebuilding's best-loved authors, Larry Haun, comes a unique story that looks at American home building from the perspective of twelve houses he has known intimately. Part memoir, part cultural history, A Carpenter's Life as Told by Houses takes the reader house by house over an arc of 100 years. Along with period photos, the author shows us the sod house in Nebraska where his mother was born, the frame house of his childhood, the production houses he built in the San Fernando Valley, and the Habitat for Humanity homes he devotes his time to now. It's an engaging read written by a veteran builder with a thoughtful awareness of what was intrinsic to home building in the past and the many ways it has evolved. Builders and history lovers will appreciate his deep connection to the natural world, yearning for simplicity, respect for humanity, and evocative notion of what we mean by "home."

Larry Haun began his building career on the Nebraska prairie, where at 17 he helped to build his first house. In 1950, he began framing in Albuquerque, N.M., and in 1951, he joined his older brother in a Los Angeles building boom that brought about rapid change in tools, materials, and building methods. Later, seeing a need for passing on production-framing techniques, Haun began teaching two nights a week at a community college--and stayed there for 20 years. He retired to Coos Bay, Ore., where he built houses for Habitat for Humanity, wheelchair ramps for poor people, and backpacked in the High Sierras, the Rockies, and the Andes. He is the author of Habitat For Humanity: How to Build a House, Homebuilding Basics: Carpentry, The Very Efficient Carpenter, and three companion videos on how to frame a house. Larry also kept a blog, A Carpenter's View: http: //www.finehomebuilding.com/blog/a-carpenters-view, where he wrote until a couple of weeks before his death at age 80 in October, 2011.

If the best writers draw from their own experience, Larry Haun is as much a historian and philosopher as he is a 60-year veteran carpenter. Larry’s memoir would be equally at home on the bookshelves of home building and architecture enthusiasts as anyone on a spiritual journey. -Brian Pontolilo, Managing Editor, Fine Homebuilding Magazine

If you are lucky in your life, you are fortunate to encounter people who are passionate about their lives. Joseph Campbell is quoted as saying; 'People always say what we are looking for is a meaning for life…I don't think that's what we're looking for. I think what we're looking for is the experience of being alive.' Larry Haun is very alive, and has shared with me his passion for building, his passion for community, and his passion to serve. All of us at Habitat have been blessed by Larry’s energy, enthusiasm and commitment to his trade. -- Bert Green, Executive Director, Habitat for Humanity of Charlotte

Drawing on a life spent building houses all over the U.S., Haun creates a first person timeline of 20th century American residential architecture by wonderfully combining together two literary styles: the memoir and the how-to book. The former editor of Fine Homebuilding, Haun writes like a carpenter, setting up the foundation of his life story with his childhood growing up in rural, Depression-scarred Nebraska, where people still lived in houses made of sod and straw. This upbringing gave Haun a connection to the land and a disdain for waste that informs his life and beliefs as he builds upon his story with the life lessons learned building houses all over the country. Just like any good carpenter, Haun brings his own artistic flourishes to the job of storytelling, adding prose-poems or ruminations about consumerism that convey his creativity and thoughtfulness. But where Haun’s true personality comes across is when he describes the construction process for the many houses he has lived in and built—from his parent’s 1,000-sq. ft. wood-frame house and the adobe and cob structures of the Southwest to the mid-century pre-fabricated and tract houses, and the more recent Habitat for Humanity homes he has donated his time to help erect. In the final chapter, Haun’s passion for building and his love of “Mother Earth” all come together as he outlines how he built his own “6-ft. by 8-ft.” greenhouse out of salvaged and recycled pieces, which serves not only to bring the story full-circle but also succeeds at furthering the author’s message that less can certainly be more. Publishers Weekly