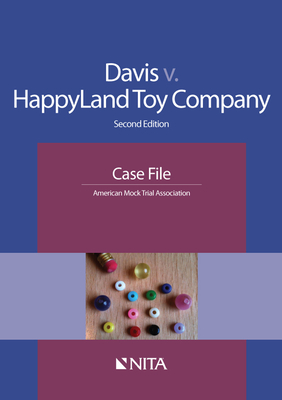 
Not On Our Shelves—Ships in 1-5 Days
Joey Davis was two years old when he died after swallowing beads from his sister's make-your-own jewelry set. Test revealed that Joey had elevated gamma-hydroxybutyric acid (GHB) levels in his system at the time of death and that the elevated GHB could have been a result of the chemicals used in the beads. Andy Davis, Joey's parent, has sued HappyLand Toy Company for strict liability, claiming that the beads were defectively designed. HappyLand Toy Company denies that its beads were defectively designed and has also asserted an affirmative defense of comparative fault, claiming that the negligence and/or recklessness of Andy Davis and/or Joey's babysitter was more responsible than HappyLand Toy Company for Joey's death.