The Force of Logic: Using Formal Logic as a Tool in the Craft of Legal Argument (Paperback) 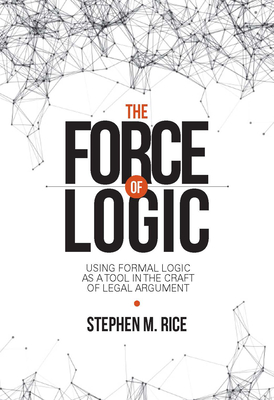 The Force of Logic: Using Formal Logic as a Tool in the Craft of Legal Argument (Paperback)


Not On Our Shelves—Ships in 1-5 Days
Have you ever read a legal opinion and come across an odd term like the fallacy of denying the antecedent, the fallacy of the undistributed middle, or the fallacy of the illicit process and wondered how you missed that in law school? You're not alone: every day, lawyers make arguments that fatally trespass the rules of formal logic--without realizing it--because traditional legal education often overlooks imparting the practical wisdom of ancient philosophy as it teaches students how to "think like a lawyer." In his book, The Force of Logic: Using Formal Logic as a Tool in the Craft of Legal Argument, lawyer and law professor Stephen M. Rice guides you to develop your powers of legal reasoning in a new way, through effective tips and tactics that will forever change the way you argue your cases. Rice contends that formal logic provides tools that help lawyers distinguish good arguments from bad ones and, moreover, that they are simple to learn and use. When you know how to recognize logical fallacies, you will not only strengthen your own arguments, but you will also be able to punch holes in your opponent's--and that can make the difference between winning and losing. In this book, Rice builds on the theoretical foundation of formal logic by demonstrating logical fallacies through the use of anecdotes, examples, graphical illustrations, and exercises for you to try that are derived from common case documents. It is a hands-on primer that presents a practical approach for understanding and mastering the place of formal logic in the art of legal reasoning. Whether you are a lawyer, a judge, a scholar, or a student, The Force of Logic will inspire you to love legal argument, and appreciate its beauty and complexity in a brand new way.