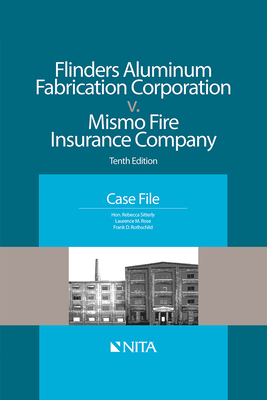 
Not On Our Shelves—Ships in 1-5 Days
Flinders Aluminum Fabrication Corporation burned to the ground on the night of November 16. George Avery, an employee of the plant, died inside. Plaintiff Jackson, the sole stockholder of the company, has filed a civil action lawsuit to recover damages owed from the policy issued by defendant Mismo Fire Insurance Company. The defendant has refused to pay, claiming that the fire was the work of an arsonist, thus indicating deliberate fraud. Mismo asserts that Jackson conspired with others to burn the plant in order to collect what was promised in the insurance policy. This breach-of-contract case file has four witnesses for both the plaintiff and the defendant. Videos of the fire, deposition statements, and a PowerPoint presentation are included as free downloads. A companion criminal case file, State v. Jackson, involves the charge of arson against Arthur Jackson. Both case files are NITA classics that have been updated in 2017. Read more about the case files in this interview with two of their authors.