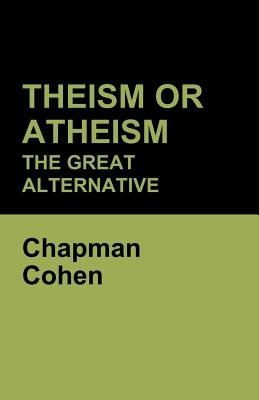 Excerpts from the book: ...it is one aim of this book to press home the point that the logical issue is between Theism and Atheism. That there is no logical halting place between the two, and that any attempt to call a halt is little more than a concession to a desire for mental or social convenience, seems to me as clear as anything can well be. And there is really nothing gained, ultimately, by the halt. Disinclination on the part of the non-Theist to push the issue to its logical conclusion is treated by the Theist as inability to do so, and is used as an argument in support of his own belief. In matters of the intellect, compromise is almost always a dangerous policy. It heartens one's enemies and disheartens one's friends. And there is really no adequate reason why those who have given up belief in deity should continue to treat this master superstition of the ages as though it were one of our most valuable inheritances, to be surrendered with lowered heads and sinking hearts. We who know both sides know that in giving up the belief in deity we have lost nothing of value, nothing that need cause us a single regret. And on that point we certainly can speak with authority; for we have been where the Theist is, he has not been where we are. Many of us know quite well all that is meant by the fear and trembling with which the believer looks upon a world without God. And we know how idle the fear is--as idle as a child's fear of the dark. What the world is like with God, there is all the experience of history to inform us; and it would indeed be strange if love and brotherhood, armed with the weapons that science has given us, could not produce a better human society than has ever existed under the dominion of the Gods.