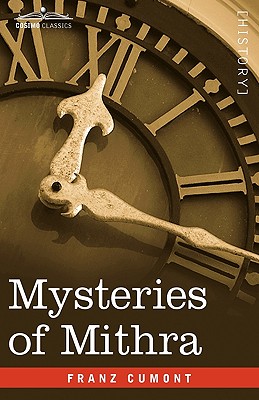 
Not On Our Shelves—Ships in 1-5 Days
Mithraism was a Roman mystery cult that drew upon the mythology of Mithras from the Persian Zoroastrian religion. In this unique book, first published in 1903, Cumont explains how the Roman version differed from the original worship of Mithras and then identifies those rituals that have some historical accuracy. Often, the Roman rituals preserved only the external trappings of Zoroastrian worship, such as using animals skins during rites and designating caves as holy places. Cumont also shows his readers how Mithraism adopted beliefs and rituals from other sources as well, creating the cult in its fully realized form. He then goes on to show how the cult fell from favor and was finally overwhelmed by Christianity. Students of history and religion, as well as anyone interested in cult religions, will find this book an intriguing journey through an obscure era. Belgian archaeologist and historian FRANZ-VALERY-MARIE CUMONT (1869-1947) wrote numerous books, often making use of his interest in philology and the study of instructions. Among his books is Life After Roman Paganism (1922).