Long Distance: Testing the Limits of Body and Spirit in a Year of Living Strenuously (Paperback) 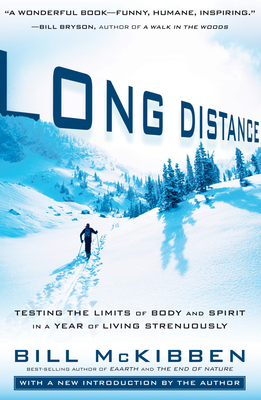 Long Distance: Testing the Limits of Body and Spirit in a Year of Living Strenuously (Paperback)


Special Order—Subject to Availability
A new edition of a classic book about what it takes to be a world-class athlete and where the true meaning of endurance can be found.

At 37, the celebrated writer and environmentalist Bill McKibben took a break from the life of the mind to put himself to the ultimate test: devoting a year to train as a competitive cross-country skier. Consulting with personal trainers, coaches, and doctors at the US Olympic Center, he followed the rigorous training regimen of a world-class athlete.

Along the way, he learned to cope with his physical limitations and, when his father was diagnosed with a life-threatening brain tumor, discovered something about the real meaning of endurance.

Told with his trademark intelligence, humor, and honesty, Long Distance is an insightful examination of the culture and mind-set of endurance athletes, and a moving and inspiring meditation on finding balance in our often harried lives.
Bill McKibben is the author of more than a dozen books, including The End of Nature, Enough: Staying Human in an Engineered Age, and Deep Economy. A former staff writer for The New Yorker, he writes often for Harper's Magazine, National Geographic, and the New York Review of Books, among other publications. He is the founder of the environmental organizations Step It Up and 350.org, a global-warming awareness campaign that in October 2009 coordinated what CNN called "the most widespread day of political action in the planet's history." He is a scholar in residence at Middlebury College and lives in Vermont with his wife, the writer Sue Halpern, and their daughter.