Miracles and Machines: A Sixteenth-Century Automaton and Its Legend (Hardcover) 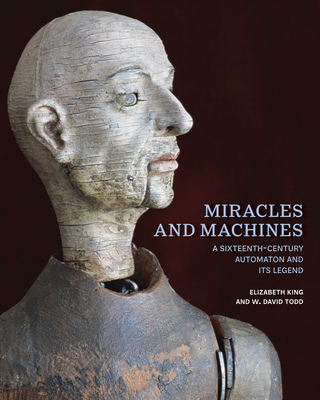 Miracles and Machines: A Sixteenth-Century Automaton and Its Legend (Hardcover)


Not Yet Published—Pre-Order Now
An abundantly illustrated narrative that draws from the history of art, science, technology, artificial intelligence, psychology, religion, and conservation in telling the extraordinary story of a Renaissance robot that prays.

This volume tells the singular story of an uncanny, rare object at the cusp of art and science: a 450-year-old automaton known as “the monk.” The walking, gesticulating figure of a friar, in the collection of the Smithsonian Institution’s National Museum of American History, is among the earliest extant ancestors of the self-propelled robot. According to legend connected to the court of Philip II of Spain, the monk represents a portrait of Diego de Alcalá, a humble Franciscan lay brother whose holy corpse was said to be agent to the miraculous cure of Spain’s crown prince as he lay dying in 1562.

In tracking the origins of the monk and its legend, the authors visited archives, libraries, and museums across the United States and Europe, probing the paradox of a mechanical object performing an apparently spiritual act. They identified seven kindred automata from the same period, which, they argue, form a paradigmatic class of walking “prime movers,” unprecedented in their combination of visual and functional realism. While most of the literature on automata focuses on the Enlightenment, this enthralling narrative journeys back to the late Renaissance, when clockwork machinery was entirely new, foretelling the evolution of artificial life to come.
Elizabeth King, a sculptor and writer, is professor emerita of sculpture and extended media at Virginia Commonwealth University School of the Arts in Richmond.