Forbidden Books Of Heresy: Revealing the Secrets of the Gnostic Scriptures From UFOs to Jesus' Love of Mary (Paperback) 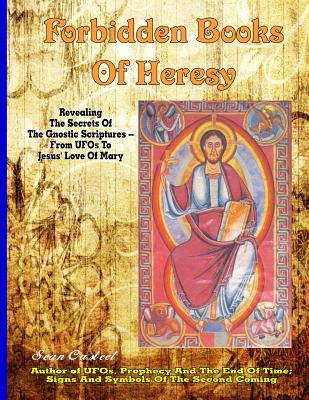 Forbidden Books Of Heresy: Revealing the Secrets of the Gnostic Scriptures From UFOs to Jesus' Love of Mary (Paperback)


Not On Our Shelves—Ships in 1-5 Days
(This book cannot be returned.)
REVEALING THE SECRETS OF THE GNOSTIC SCRIPTURES FROM UFOS TO JESUS' LOVE OF MARY

A new perception of the Christ, His disciples, as well as the prophets of the Scriptures, has begun to emerge, causing a splintering of beliefs among the faithful. Some people have begun to embrace a view that is more humanistic and at the same time more mystical.

While some consider this newly developing Christian attitude to be highly blasphemous and contrary to traditional Biblical teachings, nevertheless, there exist today numerous alternative versions of the life of Jesus and other Biblical stories that turn mainstream theology upside down to reveal a truly human Messiah and a more morally complex understanding of the Creation stories in Genesis. The discovery of the Gnostic scriptures in Egypt in 1945 has forced Biblical scholars throughout the world to rethink their beliefs about the Holy Book and to consider possibilities undreamt of in ages past.

* Did Jesus love Mary Magdalene in a decidedly physical, even sexual way? Was she truly his favorite disciple?

* Did Jesus convince Judas to betray him to the Romans? Was Jesus a conspirator in his own trial and crucifixion, which he felt he needed to undergo to consciously fulfill the prophecies?

*Were things we normally confine to our own era foreknown and prophesied in the Gnostic Scriptures? For example, the hybrid alien children so familiar from our current abduction literature?

* Was Jesus a kind of spiritual chameleon, changing his physical form to suit his needs and even at times resembling the ubiquitous gray alien of the UFOs?

These are the kinds of questions Sean Casteel grapples with in FORBIDDEN BOOKS OF HERESY. Casteel has pored over some of the Gnostic scriptures and written an analysis that not only makes the ancient accounts easier to understand for the lay reader but also makes new connections with the mysterious paranormal phenomena of our own time. If you never thought of the scriptures as thrilling, these revelations regarding the Gnostic scriptures will change your mind even as they lead you into spiritual realms you never knew existed.