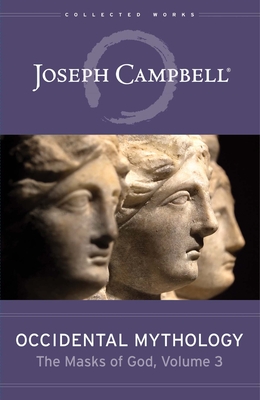 
Not On Our Shelves—Ships in 1-5 Days
The third volume in Campbell's monumental four-volume series, The Masks of God, traces the mythological underpinnings of Western religions: the shift from female-centered to male-dominated mythologies Once upon a time in the West, the focal figure of all mythology and worship was the bountiful goddess Earth. She reigned supreme as the mother and nourisher of life and as the receiver of the dead for rebirth. As Joseph Campbell here elucidates, she was more than a symbol of fertility; she was "a metaphysical symbol: the arch personification of the power of Space, Time, and Matter, within whose bound all beings arise and die." How, when, and why did this change? Campbell shows how "the mythologies of the goddess mother were radically transformed, reinterpreted, and in large measure even suppressed by those suddenly intrusive patriarchal warrior tribesmen whose traditions have come down to us chiefly in the Old and New Testaments and in the myths of Greece." He goes on to describe the mythological underpinnings of Western religions -- Judaism, Christianity, Islam, Zoroastrianism -- and their historical influence on one another. No one who cares about history, mythology, religion, or past or current events in Western civilization can do without this venerable yet perennially fresh analysis.

Joseph Campbell was an American author and teacher best known for his work in the field of comparative mythology. He was born in New York City in 1904, and from early childhood loved to read about American Indians and frequently visited the American Museum of Natural History, where he became captivated by the museum's collection of totem poles. From those days onward, Campbell's interest in mythology grew and deepened. He was educated at Columbia University, where he specialized in medieval literature, and, after earning a master's degree, continued his studies at universities in Paris and Munich. Throughout his life, he traveled extensively and wrote prolifically, authoring many books, including the classic The Hero with a Thousand Faces, the four-volume series The Masks of God, Myths to Live By, The Inner Reaches of Outer Space, and the Historical Atlas of World Mythology. Campbell died in 1987. In 1988, a series of television interviews, Joseph Campbell and the Power of Myth with Bill Moyers, introduced his views to millions of people.