The Gospel According to Mark (G. Campbell Morgan Reprint) (Paperback) 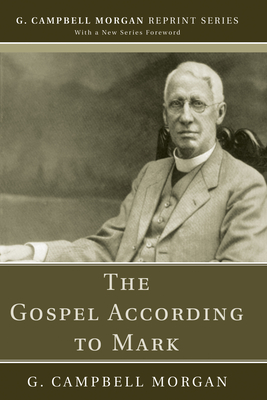 The Gospel According to Mark (G. Campbell Morgan Reprint) (Paperback)


Not On Our Shelves—Ships in 1-5 Days
Mark was probably the first Gospel to be written, and traditionally has been associated with Peter, who opened the door of faith to the Romans, as the human source. Service is its keynote and speed its characteristics. There is a charm about it which is distinctively its own, much of which is created by the bluntness and brevity of the writing of a man evidently untrained in literary methods, but also by its fast-moving chronological continuity. There is a freshness and vigor about it which immediately grips and binds. In reading it we are able swiftly but with keen and alert interest to move with Jesus of Nazareth through the wonderful crowded years of His public ministry. Dr. Morgan prepared these expositions in the very spirit of the Gospel, while preaching frequently and moving rapidly, but with captured heart. Their supreme purpose is to help hurrying men and women in these rushing days to go in the company of Jesus--of Him who ever moved with haste, but always with poise and peace, along the tortuous and at times terrifying highway of life.
G. Campbell Morgan (1863-1945) was a leading Bible expositor in England and the United States. Despite a lack of substantial formal training, Morgan was a prolific writer and teacher. Ordained into the Congregational ministry, he was the pastor of Westminster Chapel, London (1904-17 and 1933-45). Morgan also conducted two very successful teaching tours in the United States, including work with D. L. Moody's ministry.