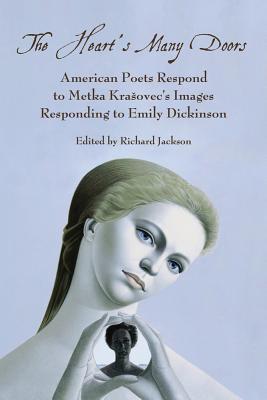 
Not On Our Shelves—Ships in 1-5 Days
(This book cannot be returned.)
Internationally acclaimed Slovian artist Metka Krašovek created a suite of drawings inspired by the poems of Emily Dickinson. Editor Richard Jackson began gathering poems created in response to the drawings — fascinating and insightful examples of double ekphrasis. The Heart's Many Doors is a rich, cross-genre combination of writing and art that functions as a multi-faceted commentary on Dickinson, art and the creative process. 41 American poets contributed poems written in response to the artwork.
Richard Jackson has published over twenty books, including thirteen books of poems, most recently Traversings, Retrievals, Out of Place, Resonancia, Half Lives: Petrarchan Poems, Unauthorized Autobiography: New and Selected Poems, and Heartwall. His translations include Alexsander Persolja’s Potvanje Sonca / Journey of the Sun and Giovanni Pascoli’s Last Voyage (Red Hen Press, 2010). With Susan Thomas and Deborah Brown, he edited the selected poems of Slovene poets, Iztok Osojnik and Tomaž Šalamun. He also edited nearly twenty chapbooks of poems from Eastern Europe. Metka Krašovec celebrated her 70th birthday in 2012 with the opening of a retrospective exhibition of her work at the Museum of Modern Art in Ljubljana—the first such retrospective ever given to a female contemporary artist by the museum. This suggests the esteem in which she is held—not only in Slovenian and European art but around the globe. Indeed, her work has been exhibited extensively throughout Europe and the U.S., and two full-color books have been devoted to her work.
In The Heart’s Many Doors, the poems of forty-one American poets oscillate out like ripples in a golden pond in response to Metka Krašovec’s images, which in turn respond to Emily Dickinson’s poems, which we have come to expect to be by turns both dark and sun-drenched. Richard Jackson has provided us with a collection of poems in many shapes, a mosaic which shows many of these poets, gathered as they are in this incandescent company, more fully realizing their own voices in homage to two brilliant presences. — Paul Mariani, poet, critic, and award-winning biographer of Robert Lowell, Gerard Manley Hopkins, William Carlos Williams and others. Metka Krašovec’s drawings reconcile us with beauty and destruction. Her visionary images make us first feel speechless, then confronted and transformed. Their goal lies behind the image, in a space between. They seduce us to enter a brutal dialogue. I can hear its echos inside a deep well, a reminder of a common source of creating and witnessing. It is hard to think of a profounder and more polyphonic way to explore this dialogue than this book. —Aleš Šteger, author of Knjiga reci (The Book of Things) and Knjiga teles (The Book of Bodies)

"To read Dickinson's poetry is often to imagine abstractions taking solid shape. Love, hope, despair, faith, time, grief: by means of conceit, Dickinson gives these abstractions concrete form. One might say that Dickinson likes to flesh them out, which perhaps speaks to her fixation on the fleshlier abstractions of pain and death. All of the aforementioned concepts are incarnated in The Heart's Many Doors, a collection of eighty-one poems by forty-one American poets, accompanied by eleven drawings by Slovenian artist, Metka Krašovec. Aptly described by editor and poet Richard Jackson as an exercise in 'double ekphrasis,' the volume pays homage to Dickinson's talent for capturing the ideal in the concrete.... The result is eleven rich inter-textual constellations with shared points of reference." —Jordan Greenwald, Emily Dickinson International Society Bulletin