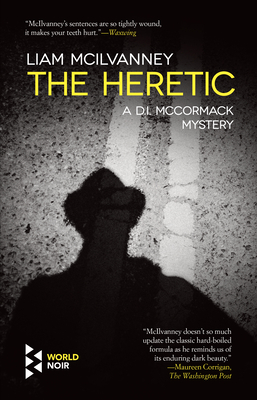 FINALIST FOR THE 2022 MCILVANNEY PRIZE

McCormack has returned to Glasgow after a stint with the Metropolitan Police in London. The reason for his return is left a lurking mystery throughout. He is investigating a series of murders that seem at first to be the result of random bouts of violence among Glasgow's poor and destitute. McCormack, however, has insight into Glasgow's underground that many of his colleagues don't. He has a secret of his own that he guards carefully but that takes him places and introduces him to people that prove essential to his investigations.

Mcilvanney's The Quaker was named the Scottish Crime Fiction Book of the Year and a Washington Post Best Book of the Year. The Guardian called it "a solidly crafted and satisfying detective story." McIlvanney is known for his well crafted plots, his deep characterization, and his stylish prose. The Heretic is no exception.