Why the Haves Come Out Ahead: The Classic Essay and New Observations (Hardcover) 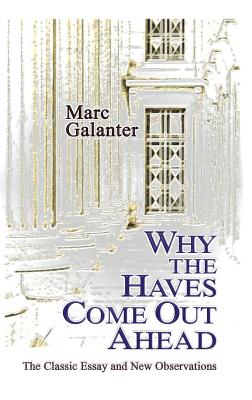 Why the Haves Come Out Ahead: The Classic Essay and New Observations (Hardcover)

By Marc Galanter, Robert W. Gordon (Afterword by), Shauhin a. Talesh (Foreword by)

This is the "fortieth anniversary edition" of a classic of law and society, updated with extensive new commentary. Drawing a distinction between experienced "repeat players" and inexperienced "one shotters" in the U.S. judicial system, Marc Galanter establishes a recognized and applied model of how the structure of the legal system and an actor's frequency of interaction with it can predict outcomes.

Notwithstanding democratic institutions of governance and the "majestic equality" of the courts, the enactment and implementation of genuinely redistributive measures is a hard uphill struggle. In one of the most-cited essays in the legal literature, Galanter incisively demolishes the myth that courts are the prime equalizing force in American society. He provides a penetrating analysis of the limitations and possibilities of courts as the source and engine of large-scale social change.

Galanter's influential article is now available in a convenient, affordable, and assignable book, with a new introduction by the author that explains the origins and aftermath of the original work. In addition, it features the author's 2006 article applying the original thesis to real-world dilemmas in legal structure and consequence today.

The collection also adds a new Foreword by Shauhin Talesh of the University of California-Irvine and a new Afterword by Robert Gordon of Stanford. As Gordon points out, "The great contribution of the article was that it went well beyond local and contingent political explanations to locate obstacles to social reform and redistributive policies in the institutional structure of the legal system itself." Gordon details ways in which Galanter's prophesies have come true and even worsened over four decades. Talesh catalogs the article's place in legal lore: "seminal, blockbuster, canonical, game-changing, extraordinary, pivotal, and noteworthy." Talesh introduces how repeat players gain advantages in the legal system and how "Galanter set out an important agenda for legal scholars, sociologists, political scientists, and economists. In short, "every law and legal studies student should be required to read the article because it contextualizes the procedural system as something more than a set of rules that should be memorized and mechanically applied."

A powerful new addition to the "Classics of Law & Society" Series by Quid Pro Books.

MARC GALANTER is the John and Rylla Bosshard Professor Emeritus of Law and South Asian Studies at the University of Wisconsin-Madison and is formerly LSE Centennial Professor at the London School of Economics. He studies litigation and legal culture. His books include 'Tournament of Lawyers: The Transformation of the Big Law Firm, ' 'Lowering the Bar, ' and 'Law and Society in Modern India.'