War Is a Force that Gives Us Meaning (Paperback) 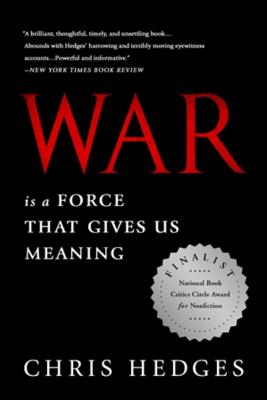 War Is a Force that Gives Us Meaning (Paperback)


Not On Our Shelves—Ships in 1-5 Days
General George S. Patton famously said, "Compared to war all other forms of human endeavor shrink to insignificance. God, I do love it so!" Though Patton was a notoriously single-minded general, it is nonetheless a sad fact that war gives meaning to many lives, a fact with which we have become familiar now that America is once again engaged in a military conflict. War is an enticing elixir. It gives us purpose, resolve, a cause. It allows us to be noble.

Chris Hedges of The New York Times has seen war up close -- in the Balkans, the Middle East, and Central America -- and he has been troubled by what he has seen: friends, enemies, colleagues, and strangers intoxicated and even addicted to war's heady brew. In War Is a Force That Gives Us Meaning, he tackles the ugly truths about humanity's love affair with war, offering a sophisticated, nuanced, intelligent meditation on the subject that is also gritty, powerful, and unforgettable.
Chris Hedges is a Pulitzer Prize-winning journalist. He spent nearly two decades as a correspondent in Central America, the Middle East, Africa, and the Balkans, with fifteen years at the New York Times. He is the author of numerous bestselling books, including Empire of Illusion; Death of the Liberal Class; War is a Force that Gives Us Meaning; and Days of Destruction, Days of Revolt, which he co-wrote with Joe Sacco. He writes a weekly column for the online magazine Truthdig. He lives in Princeton, New Jersey.