Knots Untied: Being Plain Statements on Disputed Points in Religion from the Standpoint of an Evangelical Churchman (Annotated) (Abridged / Paperback) 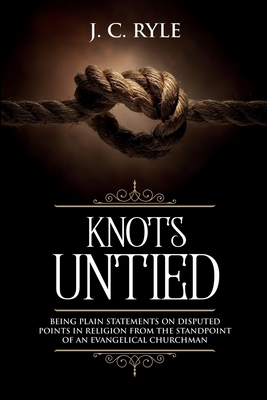 Knots Untied: Being Plain Statements on Disputed Points in Religion from the Standpoint of an Evangelical Churchman (Annotated) (Abridged / Paperback)

In this thought-provoking book, J. C. Ryle covers the gamut of theological issues facing the Church of England in his day. Though written in 1877, "Knots Untied" sounds eerily familiar to issues in more modern times. Many of the correctives which Ryle asserts are just the remedy needed in our day of pluralistic religion. Ryle's straightforward and Biblically reasoned arguments, which read like a sermon, are simple to understand. With explanations, illustrations, and practical applications, he takes to task any who would place the traditions of men above the Word of God. Ryle, who delighted in exalting the Gospel of God's grace, makes a thoroughly Biblical plea. Convinced of the authority of the Scripture himself, he in turn is able to convince others. As an Anglican, Ryle argues that the purest historical form of this tradition is Reformed in theology and evangelical in its ethos, pathos, and logos. For those who are leery as to the current and future state of the Anglican and Episcopal churches worldwide, Ryle is irrefutably persuasive as a beacon for a historical, orthodox, Biblical foundation of the Church of England. All in all, Knots Untied is a great book for Christians who want a deeper, clearer understanding of major doctrinal points from a Protestant point of view. In this slightly abridged edition, spelling has been updated and the focus is on the Evangelical and devotional depth of Ryle's message.