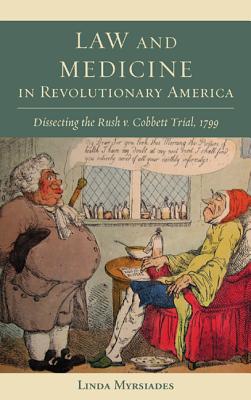 
Not On Our Shelves—Ships in 1-5 Days
Law and Medicine in Revolutionary America: Dissecting the Rush v. Cobbett Trial, 1799 offers the first deep analysis of the most important libel trial in post-revolutionary America and an approach to understanding a much-studied revolutionary figure, Benjamin Rush, in a new light as a legal subject. This libel trial faced off the new nation's most prestigious physician-patriot, Benjamin Rush, against its most popular journalist, William Cobbett, the editor of Porcupine's Gazette. Studied by means of a rare and substantial surviving transcript, the trial features six litigating counsel whose narrative of events and roles provides a unique view of how the revolutionary generation saw itself and the legacy it wished to leave to its progeny. The trial is structured by assaults against medical bleeding and its premier practitioner in yellow fever epidemics of the 1790s in Philadelphia, on the one hand, and castigates the licentiousness of the press in the nation's then-capital city, on the other. As it does so, it exemplifies the much-derided litigiousness of the new nation and the threat of sedition that characterized the development of political parties and the partisan press in late eighteenth-century America.
Linda Myrsiades is professor emeritus of English and Comparative Literature at West Chester University. She has most recently published Medical Culture in Revolutionary America: Feuds, Duels, and a Court Martial (2009).