The Root Stanzas of the Middle Way: The Mulamadhyamakakarika (Hardcover) 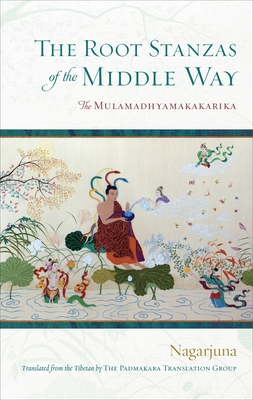 The Root Stanzas of the Middle Way: The Mulamadhyamakakarika (Hardcover)


Special Order—Subject to Availability
A new English translation of the founding text of the Madhyamaka (Middle Way) school of Buddhism, with the Tibetan version of the text included.

The Root Stanzas holds an honored place in all branches of Tibetan Buddhism, as well as in the Buddhist traditions found in China, Japan, and Korea, because of the way it develops the seminal view of emptiness (shunyata), which is crucial to understanding Mahayana Buddhism and central to its practice. It is prized for its pithy and pointed arguments that show that things lack intrinsic being and thus are “empty” (shunya). They abide in the Middle Way, free from the extremes of permanence and annihilation.
NAGARJUNA, the South Indian Buddhist master who lived some six hundred years after the Buddha, founded the Madhyamaka (Middle Way) school of Mahayana Buddhism. He is arguably the most important, influential, and widely studied Mahayana Buddhist philosopher.
"Anyone who is seriously interested in not suffering must know that duality and the dualistic mind are the root of all suffering. But how do we overcome duality without stepping on dualistic territory and without holding on to the hinges and railings of dualism? How do we develop the courage to shrug off even the understanding of nonduality by knowing that understanding to be just another figment of dualistic mind? This text is probably your best bet to prove just that!
It is so amazing that people like Nagarjuna actually walked on this earth. It is even more amazing that he came up with this text. If you don’t read this book, it’s like being on the earth without ever noticing that there is a sky above your head."—Dzongsar Jamyang Khyentse, author of What Makes You Not a Buddhist

"Nagarjuna’s Mulamadhyamakakarika is the foundation of the Mahayana’s Middle Way teachings. All Madhyamaka schools have developed from this source, without which, teachings on the Mother Prajnaparamita would be impossible to fathom. Personally, this text opened my eyes to the Buddha’s teachings on emptiness and has therefore benefited me greatly. With their understanding and training as a foundation, Padmakara has done an exceptional job with this translation. I am so glad that they have accomplished this formidable task, and I hope this edition serves as a great leap forward in the transplantation of the Buddhadharma in the West, especially in regard to the Middle Way teachings."—Dzigar Kongtrul Rinpoche, author of Light Comes Through