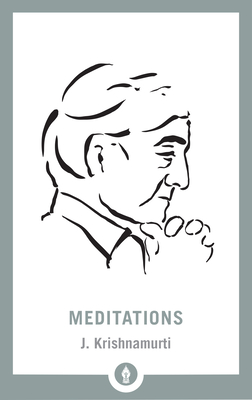 
Special Order—Subject to Availability
A classic collection of excerpts from one of the great spiritual leaders of the twentieth century--now in the newly designed Shambhala Pocket Library series.

Jiddu Krishnamurti (1895–1986) went from his origins in a small south Indian village to become one of the great spiritual teachers of the twentieth century. He taught that the only way to create peace on earth is to transform the human psyche—but that there is no path to this transformation, no method for achieving it, and no gurus nor spiritual authorities who can help. Rather, the transformation is a truth that each of us must discover within ourselves. This classic collection of brief excerpts from Krishnamurti’s books and talks presents the essence of his teaching on meditation—a state of attention, beyond thought, which brings total freedom from authority and ambition, fears and separateness.
Jiddu Krishnamurti (1895–1986) was one of the most influential spiritual teachers of the twentieth century. He traveled and lectured throughout the world until his death at the age of ninety. His talks and works are preserved in more than seventy books.
"Few modern thinkers have integrated psychology, philosophy, and religion so seamlessly as Krishnamurti."— Publishers Weekly