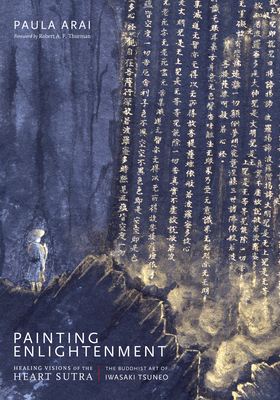 By Paula Arai, Robert A. F. Thurman (Foreword by)


Little known during his lifetime, the Japanese biologist and artist Iwasaki Tsuneo (1917-2002) created a strikingly original and exquisitely intricate body of modern Buddhist artwork. His paintings depict themes ranging from classical Buddhist iconography to majestic views of our universe as revealed by science--all created with the use of painstakingly rendered miniature calligraphies of the
Heart Sutra, one of the most important scriptures of Mahayana Buddhism. In this groundbreaking book, Paula Arai presents over fifty of Iwasaki's paintings, elucidating their Buddhist contexts and meanings as well as their intimate connections to Iwasaki's life as a war survivor, teacher, scientist, and devout Buddhist practitioner. Having been posthumously recognized by His Holiness the Dalai Lama, Iwasaki's paintings are sure to be regarded as an innovative and heartfelt contribution to the artistic legacy of twentieth-century Buddhism.
PAULA ARAI (Harvard University, Ph.D.) is the Urmila Gopal Singhal Professor in the Religions of India at Louisiana State University. She is the author of Bringing Zen Home: The Healing Heart of Japanese Women's Rituals and Women Living Zen: Japanese Soto Buddhist Nuns.
“Iwasaki Tsuneo’s stunningly beautiful paintings of life and universe, rendered with lines of masterful miniature calligraphy of the Heart Sutra, reveal an infinite potential of dynamic interaction between scientific findings and the timeless wisdom of Buddhist teaching.”—Kazuaki Tanahashi, author of The Heart Sutra: A Comprehensive Guide to the Classic of Mahayana Buddhism

“Iwasaki’s luminous calligraphies, set in striking paintings both traditional and contemporary, are a remarkable gift to meditators, Buddhists, artists, and scientists of the contemporary age. Paula Arai is uniquely qualified to bring these paintings to a larger audience, given her mastery of Japanese language, culture, and religion, the trust bestowed on her by Iwasaki’s family, and her own Buddhist practice. Given the universal appeal of the Heart Sutra and its calligraphy, this book is destined to become a timeless treasure returned to again and again for its inspiration and sheer beauty.”—Judith Simmer-Brown, author of Dakini’s Warm Breath: The Feminine Principle in Tibetan Buddhism

“Japanese calligrapher and painter Iwasaki Tsuneo reveals to us a wondrous universe suffused with the light of the Buddha’s enlightenment experience. He does so by embedding the characters of the Heart Sutra, a famous Mahayana scriptural text, in depictions of the macrocosmic Big Bang scene, of the microcosmic double helix in the DNA molecule structure, as well as of ordinary landscapes and natural scenery. Paula Arai’s magnificent book lays out the visual imagery and provides a delightfully written and highly insightful guide to Iwasaki’s art. This is a breathtaking glimpse of our intimately interconnected universe.”—Ruben L. F. Habito, Guiding Teacher, Maria Kannon Zen Center and author of Healing Breath: Zen for Christians and Buddhists in a Wounded World

“We are so fortunate to have the chance to see the truly awe-inspiring paintings of Iwasaki Tsuneo expressing the wisdom and compassion of the Heart Sutra. Each painting meets the viewer with images that unfold the teachings in a deeply moving and healing way. Dr. Paula Arai demonstrates incredible devotion to the artist and to seeing that his vision and work be shared as a beneficial force in the world.”—Linda Ruth Cutts, Senior Dharma Teacher, San Francisco Zen Center