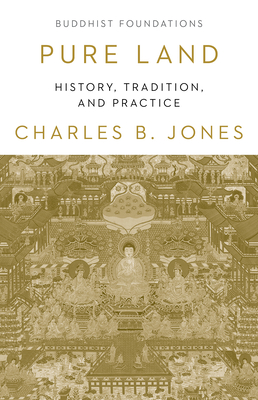 By Charles B. Jones


In Stock—Click for Locations
An introductory guide to the beliefs and key concepts of Pure Land Buddhism, the most widely practiced form of Buddhism in East Asia.

Pure Land is a brief introduction to the history and practices of Pure Land Buddhism, a popular and growing global tradition. Pure Land practices center on Amitābha Buddha, rebirth in his pure buddha-land, and the guaranteed attainment of buddhahood. It constitutes the dominant tradition of most Buddhists in East Asia and is the most common form of practice within immigrant Buddhist communities in America, yet it remains elusive to many general readers of Buddhism. This brief introduction summarizes the core teachings of this tradition and charts its growth throughout the world.

Part of the Buddhist Foundations series, Pure Land covers the spiritual tenets behind the tradition before describing how prayer and devotion to Amitābha allow for rebirth in a realm free from suffering and ideal for progress on the path to enlightenment. It then outlines specific Pure Land practices, all the while providing historical context to account for its widespread popularity throughout East Asia. The author also covers contemporary Pure Land traditions, providing a useful touch point for modern readers. Pure Land practitioners and readers interested in Asian-American Buddhist communities now have a concise guide to the ideas, practices, and origins of this widely popular spiritual tradition.
CHARLES B. JONES is an associate professor of Religious Studies at The Catholic University of America in Washington, DC. He earned a PhD at the University of Virginia in 1996 and specializes in Pure Land Buddhism in China.
“This is the first book in English that covers the essential elements of the overall development of Pure Land Buddhism—from India to its spread in China and East Asia. This impressive work by Professor Jones is based on the latest scholarship but is presented to be accessible to ordinary readers who are not specialists. Pure Land dispels the stereotypical image of Pure Land Buddhism as being ‘merely’ a devotional and popular belief. Instead, we learn that its beginnings are reflected in the Sanskrit texts and were nurtured through the two millennia of orthodox tradition practiced by not only laypersons but also by monastics. The Pure Land tradition probably offers the most egalitarian path to enlightenment, which partly accounts for its ubiquitous presence throughout the Mahayana Buddhist world. This book is certain to expand the readers’ knowledge of the scope of what Buddhism offers to the contemporary world.”—Kenneth K. Tanaka, past president of the International Association of Shin Buddhist Studies and Professor Emeritus at Musashino University, Tokyo

“Charles Jones presents Pure Land as having had a central role in the history, thought, and practice of East Asian Buddhism. Despite being one of the most popular streams of Mahayana, Pure Land has long been marginalized in the West. It is sometimes seen as simple-minded, when its simplicity results from the profundity of a direct path to awakening. Unlike some other traditions, Pure Land has for centuries been open to lay practitioners—making it particularly relevant today when lay practice is increasingly the norm. With this work, Jones demonstrates that not only is he one of the preeminent scholars of Pure Land Buddhism in the world today, but that he has the ability to make the Pure Land tradition accessible for practitioners in our present world.”—Richard K. Payne, Yehan Numata Professor of Japanese Buddhist Studies

“A compass to orient people to the Pure Land tradition, Pure Land: History, Tradition, and Practice is a solid, clear, and contextualized account that fills a lacunae in the field. Its accessibility makes it an inevitable choice as a classroom resource or for anyone seeking a clear path to understanding. It offers insight into the dynamics that led to the Pure Land tradition becoming pervasive in the East Asian Buddhist landscape.”—Paula Arai, PhD, author of Women Living Zen and Painting Enlightenment

“Charles Jones has written an eminently readable description of the Pure Land form of Buddhism as it evolved—from an outline of its core religious perspectives and the myths and teachings described in its authoritative scriptures to a series of descriptions of the many fascinating individuals who contributed to shaping the tradition. This book will serve as a reliable source both for students of Buddhism and followers eager to learn more about its history and practices. From the ancient times to the present, this is the first work that presents this tradition of Buddhism in such a broad manner yet with such a detailed look at the issues discussed within the tradition itself.”—Mark L. Blum, Professor of Buddhist Studies and Japanese Studies, University of California, Berkeley

“A comprehensive and engaging introduction to the Pure Land tradition . . . Jones writes eloquently and appealingly, and his analysis of Pure Land is a joy to read.”—Buddhistdoor Global