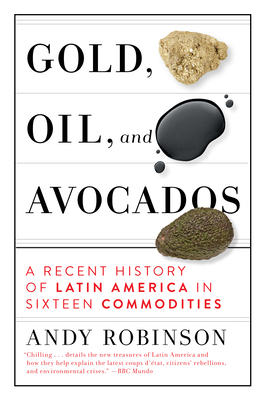 
On Our Shelves Now at:
The past decade has seen major political upheaval in Latin America--from Brazil to Chile to Venezuela to Bolivia--but to understand what happened, ask first where your quinoa and lithium batteries came from...

The 21st century began optimistically in Latin America. Left-leaning leaders armed with programs to reduce poverty and reclaim national wealth were seeing results—but as the aughts gave way to the teens, they began to fall like dominos. Where did the dreams of this "pink tide" go? Look no further than the original culprits of Latin American disenfranchisement: resource-rich land and unscrupulous extraction.

Recounting the story commodity by commodity, Andy Robinson reveals what oxen have to do with the rise of Jair Bolsonaro, how quinoa explains the mob that descended on Evo Morales, and why oil is the culprit behind the protracted coup in Venezuela. In addition to the usual suspects like gold and bananas which underscored the original plunder of the Americas, Robinson also shows how a new generation of valuable resources—like coltan for smartphones, lithium for electric cars, and niobium for SpaceX rockets—have become important players in the fate of Latin America. And as the energy transition sets mineral prices soaring, Latin America remains at the mercy of the rollercoaster of commodity prices.

In Gold, Oil, and Avocados, Robinson takes readers from the salt plains of Chile to the depths of the Amazonian jungle to stitch together the story of Latin America's last decade, showing how the imperial plunder of the past carries on today under a new name.
ANDY ROBINSON is a roving reporter for the Barcelona daily, La Vanguardia. A graduate of the London School of Economics, he moved to Spain in the eighties where he wrote for The Guardian, The New Statesman, City Limits, Ajoblanco, El Mon, and others. He is a regular contributor to The Nation and has published two previous Spanish-language books, Un reportero en la montaña mágica (Ariel, 2013) and Off the road, miedo, asco y esperanza en América (Ariel, 2016).
"Andy Robinson’s new book, Gold, Oil and Avocados, urges us to look at [Eduardo Galeano's] Open Veins again. Travelling by plane, bus and riverboat across a region still pitted by mines, plantations, failed hydroelectric projects and cattle ranches, he finds deep resonances with Galeano’s thesis in today’s Latin America...In prose reminiscent of Claude Lévi-Strauss’s Tristes Tropiques ... Robinson covers much ground in this restless exposé of wrongdoing." —The Times Literary Supplement

"A work of excellent on-the-ground reportage...Readers see the devastation firsthand as the author leads us to obscure, hard-to-reach mines and farming backwaters.... [Robinson] lays out the situation in stark, penetrating detail." —Kirkus Reviews, Starred Review

“Drawing inspiration from Eduardo Galeano’s Open Veins of Latin America, Robinson sketches the rise and fall of progressive governments across the region over the past two decades… a sobering and well-documented picture, shot through with Robinson’s caustic wit (avocados, he writes, are a “tasteless alternative to butter spread on trillions of slices of students’ toast”). This sweeping survey packs a punch.”
—Publishers Weekly

"Inspired by Eduardo Galeano, with a touch of Che Guevara’s Motorcycle Diaries and a nod to Joseph Conrad’s Heart of Darkness, Andy Robinson takes us on a troubling journey through the extractivist landscape of Latin America. In a series of vignettes, from the avocado killing fields of Western Mexico, through the corporate plundering of the Amazonian soy plantations to the lithium-powered developmental ambitions of Evo Morale’s Bolivia, Robinson reminds us just how closely our daily lives are caught up with the economic aspirations, ecological damage and political machinations of distant commodity producers. A vivid travelogue with a serious message." —Richard Kozul-Wright, Director, United Nations Conference on Trade and Development

"Who knew that gold, oil and avocados were three of a kind, much less that they could shed light on the major political upheavals affecting Latin America in the last 15 years?  The region's fortunes have always turned on what economists dub 'the commodity lottery.'  Andy Robinson shows that the lottery lives on, and is widely played, in the 21st century." —Barry Eichengreen, author of Exorbitant Privilege

"This is a beautifully written book, which describes an ugly reality. Andy Robinson is a committed reporter with a keen eye." — Luis Salas, former economic advisor to Hugo Chávez

"This is an essential guide to understanding the complex and changing politics of Latin America. In clear, unsparing prose, Robinson lays bare the material underpinnings and imperialist involvement in supposedly national political processes: it’s all about the resources, stupid!" —Jayati Ghosh, Professor of Economics, University of Massachusetts at Amherst

"[Gold, Oil, and Avocados] shows to what extent the struggles for land and raw materials—in which governments, local mafias and multinational corporations are active—explain the recent coups, civil revolts and the environmental crisis in Latin America. [...] Who will pocket the lion's share of the business in these consumer goods? Galeano asked this question fifty years ago. Robinson's new book answers: Corporations based in New York, Zurich or Shenzhen. The veins remain open." —Frankfurter Allgemeine Zeitung

"A chilling book in which Robinson details the new treasures of Latin America and how they help explain the latest coups d’etat, citizens rebellions and environmental crises" —Irene Hernández Velasco, BBC Mundo